Apple has officially made available for download iOS 11 beta 6 IPSW, as well as beta 6 of macOS 10.13 High Sierra, tvOS 11, and watchOS 4 for those who have an active Apple Developer account.

All of the latest versions of the aforementioned platforms are available to download right now from the developer portal or as over-the-air updates on the device. 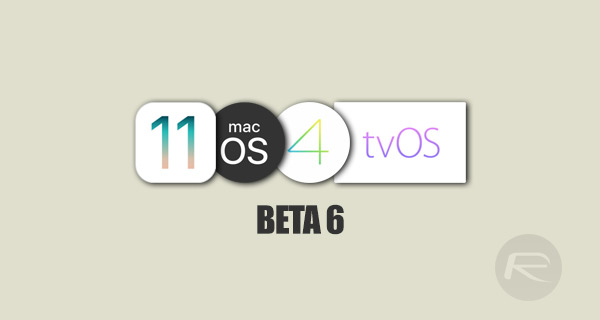 iOS 11: Apple used the last iOS 11 beta, and others before that in all honesty, to fix a number of issues that developers and public testers were facing with iOS 11 and third-party apps. As an example, Apple’s engineers have fixed issues with video playback in apps like Amazon Video and Sling TV, as well as rectifying issues with some of Facebook’s and Kindle’s services for device owners who use those apps.

Now that we have access to beta 6 of the platform, it is fair to suggest that we likely won’t be seeing any new feature additions going forward, with Apple using the time between now and launch to fix a number of the known issues which keep making it into the release notes. Until then, the advice is the same as always, keep using it and keep reporting the issues to Apple in order to enable everyone to get a streamlined pristine release next month.

macOS 10.13: macOS 10.13 High Sierra is undeniably one of the more exciting platforms that Apple currently has in beta. The progression up until this point has been impressive but it’s the overall feature improvements in general which makes High Sierra one to look forward to in the coming weeks.

From a feature perspective, Apple has really gone to town with High Sierra. Native apps like Safari, Mail, and Photos have been hugely improved with machine learning, advanced editing tools, faster loading times, more efficient use of storage space, and even the ability to disable auto-playing videos in websites. Apple has also used High Sierra as the perfect opportunity to come more aligned with iOS by introducing the Apple File System (APFS).

tvOS 11: There’s been a fair bit of speculation recently about an upgraded 4K-capable Apple TV potentially coming to the market, but for the time being developers and testers are stuck deploying tvOS 11 to the current fourth-generation hardware. Not that it is a particular hardship in all honesty. Apple has once again progressed the platform with this release, with tvOS 11 on the whole featuring improved background and notification abilities, as well as a stunning new automatic light and dark mode, among other things.

watchOS 4: It has probably been a long time coming, but watchOS 4 contains some wonderful changes and design improvements which really gives the power or workouts back to the Apple Watch owner. These improvements manifest themselves with overhauled apps making it much easier to plan, track, and invoke workouts directly on Apple Watch. And of course, and Apple Watch firmware update wouldn’t be complete with some wonderful new animated faces to be able to take advantage of.

As for how to grab the downloads, beta 6 update of iOS 11, tvOS 11, macOS 10.13 High Sierra and watchOS 4 are all available as OTA update directly on the device itself, or as a direct download from developer.apple.com.

Beta 6 of all of the above mentioned platforms are currently available to developers only. Public testers who are currently in the process of testing iOS 11, macOS 10.13 High Sierra and/or tvOS 11 can expect a release of public beta 5 in the coming days.

Update x2: iOS 11 public beta 5, which is essentially same as developer beta 6, is available to download now as well.