We saw this happen with the Kindle Fire and HP TouchPad, and we’re seeing it happen with the  BlackBerry PlayBook. RIM, just like HP, is struggling to sell their iPad-competing tablet. The PlayBook is now expected to go on a fire sale soon to get rid of excess stock. You may actually want to get yourself a PlayBook now, though, since the modding community recently managed to “jailbreak” it and you can now even install Android Market on it! Check out our step-by-step guide after the break which shows you exactly how you can install Android Market to play around with the wide variety of apps that Android offers. 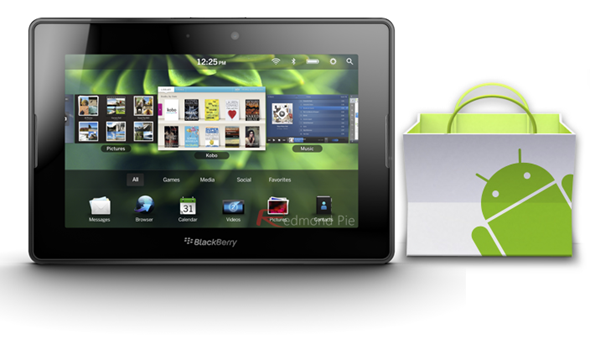 The news comes from IntoMobile – a blog dedicated to covering the latest and greatest from the world of mobiles and mobile technology – in the form of a post in which they discuss Android Market on PlayBook and how you can install it on your own PlayBook.

These instructions come straight from the developers:

Step 4: Package an Android app as a .bar file, install and launch it to set things up. Consider installing a launcher app since it will be required later on to actually launch Market. Get one from here [PlayBook BARS]

Step 5: Using WinSCP for Windows, log into your BlackBerry PlayBook as root. Copy the system folder from Google Apps in Step 3 to the root of your PlayBook’s storage and merge it with the PlayBook’s own system folder.

Step 7: You must now kill the Android Player with:

The XXXX above is different for each device.

If you followed the steps correctly, Android Market will now be installed and working on your BlackBerry PlayBook.