One of the most favored update to be implemented into a new build of iOS has to be Apple’s iMessaging system that came bundled with iOS 5 back in October 2011. The iMessage service is Apple’s messaging experience on iOS devices, working across the iPhone, iPad, iPod touch and soon to be officially supported by the Messages app as part of the new OS X Mountain Lion operating system coming this summer. The service allows all iOS 5 users to send unlimited messages over a data or Wi-Fi connection to other iMessage users and is bundled as part of the native Messages app.

The beautiful thing about iMessage, is not only that it is free of charge to use, it negated the need in some cases to spend money sending out text messages, but also adds a perk to share photos, videos, location and contact information via other iMessage users, as well as initiate group chat sessions. Some of the more powerful and optional configurable choices include delivery and read receipts, seeing when the recipient is typing a message and being able to pick up the conversation where you left off on other iOS devices. Although some users have had a number of minor issues with iMessage, it is certainly a feature that has been well received and something I am sure we will see grow in the future through official channels.

iMessage manages to function almost like an instant messaging service, limited only by the fact that Apple only supports the transfer of a limited number of file types or data, as mentioned above and in the official iOS 5 release documentation. In most cases, this is perfectly reasonable, but some advanced users likes to have the option to receive files that aren’t officially supported by Apple’s iMessage engineers, which is where the jailbreak community comes in. The Attacher tweak in Cydia, developed by Dany Lisiansky hooks into the core of iMessage and allows users to receive and open any attachment type through the iMessage interface. 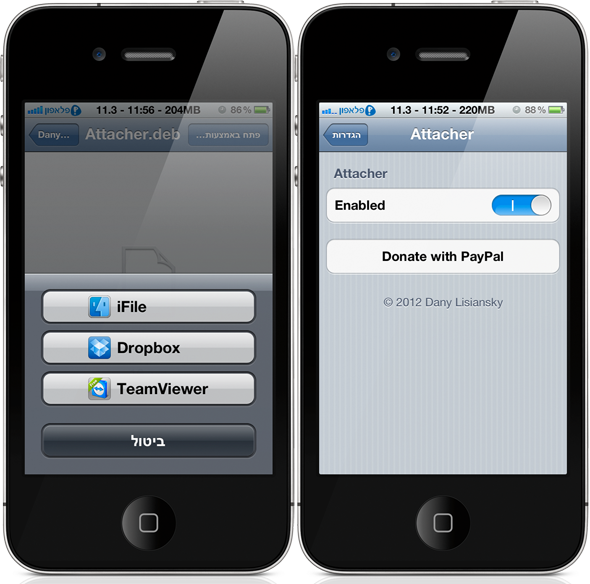 Messages with attachments are received and displayed in the normal manner in the conversation view. The name of the attachment as well as its extension is displayed along with a familiar disclosure button which, when invoked, brings up a list of possible programs that could open the file. As an example, if a user received a debian (.deb) file as an attachment using iMessage, the list may give iFile or Installer as a possible option to open the file. Tapping on the required option will simply cause the attached file to be opened as you would expect. Attacher is purely a tweak that allows amendments on the receiving end of the chain, meaning that it will not allow users to attach alternative file types to their messages.

Attacher is available as a free of charge download from the ModMyi repository and requires an iMessage capable device. Once installed, Attacher can be toggled on or off through the dedicated preferences panel in the native Settings app.