There has never been a better time to get your hands on some cutting-edge, globally popular software that is in use all over the world with millions of satisfied PC and hardware owners.

Right now, via CDKeyOffers, you can pick-up Windows 10 Pro and AOMEI Backupper Pro 5.7 for just $19. 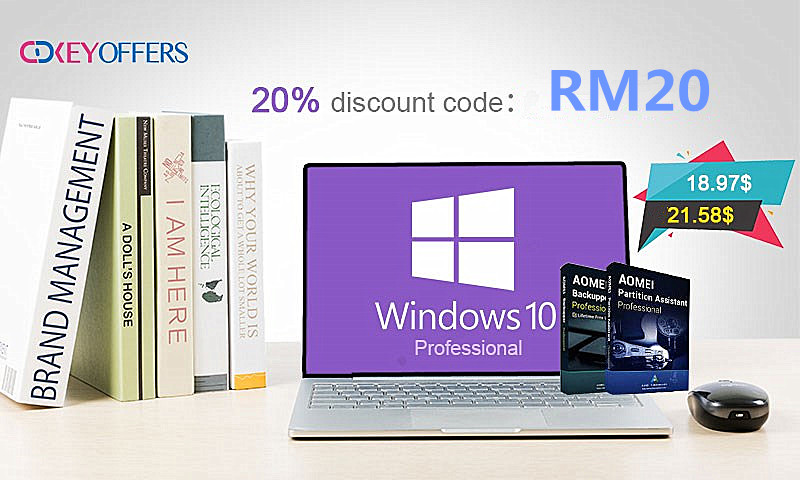 Windows 10 Pro doesn’t need an official introduction. Redmond-based Microsoft released Windows 10 into the global community back in July 2015 and it has been purchased, installed, and consumed on literally millions – if not billions – of machines all around the world in the time that has followed.

With the deals that we have for you, you can pick up a digital product key that gets you a registered version of the operating system as well as the fantastic AOMEI Backupper tool.

If you aren’t familiar with AOMEI Backupper, it essentially exists to take your PC disk partition management to the next level by making it a lot easier and safer for you to interact with that process:

AOMEI Backupper Professional brings a wide variety of tools and user-friendly interface, which aims to make your PC disk partition management much easier and safer than ever. For example, it allows you to create, resize, move, merge and split partitions without losing data to maximize disk space use. AOMEI PA Pro also releases new features like disk conversion between MBR and GPT, OS migration, Windows 10/8 To Go, etc.

Let’s take a look at the deals that are on the table using our unique RM20 discount code that secures you an impressive 20% discount on the price.

Remember, the RM20 discount code is your friend when you go on this purchasing journey. And make sure to provide a valid and active email address as your codes are going to be issued to you via email when you go through with the purchase using code RM20.

Disclosure: This is a sponsored post but we don’t get any commission from sales made on CDKeyOffers.