There are many advantages to owning a smartphone running stock Android, one of which is that, when a new version of Google’s software arrives, you don’t have to wait forever for the OTA to hit your device. Such is the case with the Google Play Edition Samsung Galaxy S4 and HTC One, which will both begin to see the Android 4.3 Jelly Bean update as of today.

Not every Samsung smartphone owner is a fan of the company’s TouchWiz overlay, and similarly, not everybody wielding an HTC device does so because of their undying love for Sense. Acknowledging that some consumers like the pure Android experience, both Samsung and HTC recently teamed up with Google to offer stock versions of their respective handsets through the Play Store, at which point the HTC One Google Play Edition and Samsung Galaxy S4 Google Play Edition were born.

While owners of the original S4 and One will be waiting quite a while to see any of the latest and greatest flavor of Android, Google Play Edition owners will be getting their OTA as of today. With an abundance of new and exciting features, perhaps the most notable of which is the introduction of restricted profiles, Android 4.3 is a fairly substantial update for both end user and developer.

As well as the profile facilities, Android 4.3 also offers support for OpenGL ES 3.0, bringing a better graphics output that allows developers to really make the most of the resources available to them. This, in turn, will help to boost the performance of games in general, and with mobile devices becoming ever more integral to the gaming community, this can only be a good thing. 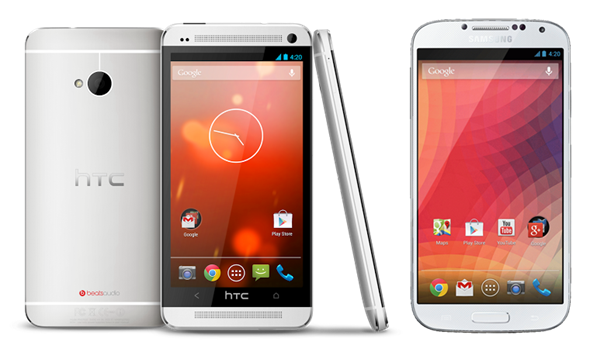 If you have a Google Play Edition HTC One or Galaxy S4, there’s not really any good reason for you not to update, so just sit patiently and wait for that magic notification, and you’ll be soon enjoying the very latest version of Android on your device.

For the rest of you, although an update may be forthcoming at some point, you’re probably more than aware that the wait can often be cumbersome. The best thing to do – if your device wasn’t announced by Google as immediately supported – is to presume it’s not going to be arriving at all; that way, you can avoid any disappointment later on down the line.

However, this works as sheer luck, you can try to force the Android 4.3 update on your device – if you haven’t received it yet, of course – by following the steps given below:

Step 2: Go to Settings on your device and go to Apps.

Step 3: Swipe to All and scroll down and locate Google Services Framework, tap it.

Step 4: Tap on Force Stop, and then tap Clear data and Clear cache.

Step 5: Go back, turn on Wi-Fi (with Airplane mode still on) and connect to your Wi-Fi network. And in Settings, scroll down to About and then tap on System updates. Now tap on Check now.

Step 6: You should see the Android 4.3 update on the screen. Simply install.

These steps aren’t guaranteed to work and might take a few tries. It worked fine on our Nexus 4 and Galaxy Nexus here at Redmond Pie. If it does work for you, do let us know in the comments section below!