Facebook Inc. has updated their official app for iPhone/iPod touch. The update brings improvements in performance and fixes bugs. 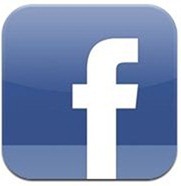 The Facebook for iPhone app was there on day one of the App Store in 2008. It is the most downloaded free app on the App Store, however, it’s popularity has actually decreased over time. In August 2010, it had over 103 million active users. Today, it’s left with less than 85 million users.

In recent times, Facebook for iPhone users have been dissatisfied with app’s performance. Instead of fixing bugs, they say, the app brings new bugs with each updates. You can see people’s dissatisfaction by going through some the user reviews on the app’s official page.

I can speak from first-hand experience that the Facebook for iPhone app has, in fact, deteriorated in performance over time. So much so that I now prefer going to Facebook’s HTML5 Mobile website which is optimized for touch screen devices; it works flawlessly on my fourth-generation iPod touch.

– Restored the Send button for Comments, Chat and Messages
– Restored friend lists to the News Feed filter
– Fixed a number of bugs that caused the app to crash

You can download the updated app from the link embedded at the end or just open up App Store on your iOS device and tap on “Update All” from Updates.

Facebook currently has more than 750 million active users. Despite all the hype surrounding Google+, once must realize that the Facebook Juggernaut has a lot of momentum and it will take some serious time before + actually gets around to being a close competitor. Don’t get me wrong, + is a great social networking site, but it is empty right now and will be so until Google opens it up for everyone. 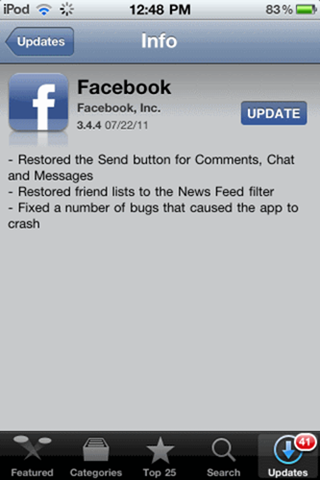 Facebook launched Skype-powered video calling two weeks ago. The company is reportedly working on bringing an app to the iPad platform. We’ve also talked about leaked Instagram-like photo-sharing apps and of course, Project Spartan: which is being billed as a web-based competitor to the iPhone App Store.