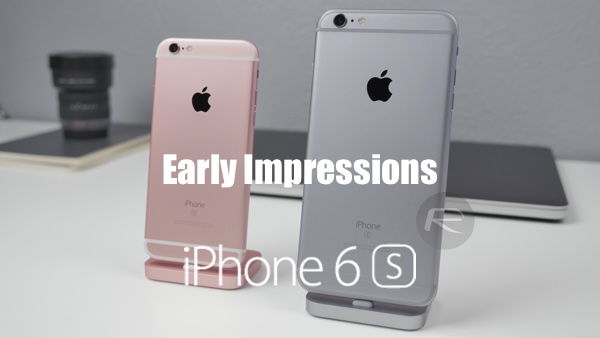 The new iPhone 6s is also 1.5x faster than previous generation models, 6 and 6 Plus. It rocks Apple’s new 64-bit A9 chip giving you a 70% faster CPU and 90% faster GPU. The new chip definitely helps in app loading time, which is noticeably faster now than previous-gen iPhones.

Embedded inside the A9 chip comes the new M9 motion coprocessor that connects to the accelerometer, compass, gyroscope, and barometer for a wide range of fitness tracking capabilities. It also allows Siri to always stay on for when you say a simple “Hey Siri” voice command. This will wake up your device even with the device locked. This is a pretty cool feature.

There’s also 2GB RAM, which in my tests makes for a huge difference. Gone are the reloading tabs in Safari, refreshing of backgrounded apps, and general lag in the OS.

Another change is the cameras. It now comes equipped with a new 12MP sensor with advanced pixel technology for the iSight camera that by default takes Live Photos, and a 5MP FaceTime HD camera for those selfies. The iSight camera gives you the capabilities to now record up to 4K video at 30fps. It also supports 1080p HD video recording at 30fps or 60fps, and 720p HD video recording at 30fps. The 240fps and 120fps Slo-Mo is there too. The 5MP FaceTime camera now gives you video recording up to 720p HD at 30fps. It also steps up your selfie game. With the improved 5MP FaceTime HD camera, it also includes a Retina Flash which makes your display flash three times brighter than usual thanks to a custom display chip. It provides you with the best true tone photo when in low light condition or whenever you need that flash for the perfect selfie.

Touch ID, too, has gotten an improvement. It uses a 2nd generation fingerprint sensor giving you a very fast and responsive new Touch ID experience. Trust me, it is noticeably fast! When using it to unlock my device, it barely gave me enough time to peak at the digital clock on the lock screen.

These are some of the key differences between both the current and last generation models. With these improvements, will it make you change your mind of what you currently think of the new iPhone?

Be sure to watch the full video below showing our hands-on and early impressions with an iPhone 6s in Rose Gold color and iPhone 6s Plus in Space Gray:

Stay tuned for more iPhone 6s video, including our full review, coming soon! Also don’t forget to let us know what you would like to see in a future iPhone 6s video in the comments section below. It could be about a specific feature of iPhone 6s, or a comparison of it with any other phone you like.