Downgrade To iOS 10.3.1 No Longer Possible As Apple Stops Signing The Firmware

You can now no longer downgrade to iOS 10.3.1 firmware on a compatible iPhone, iPad or iPod touch device. Here’s what you need to know.

Today Apple pulled the plug on iOS 10.3.1 firmware, killing the downgrades or upgrades to the said firmware in the process. While normally this wouldn’t matter much for a firmware like iOS 10.3.1 as it has no public jailbreak available for it as yet, Pangu team however did demo a jailbreak on the firmware though it was never released to general consumers. 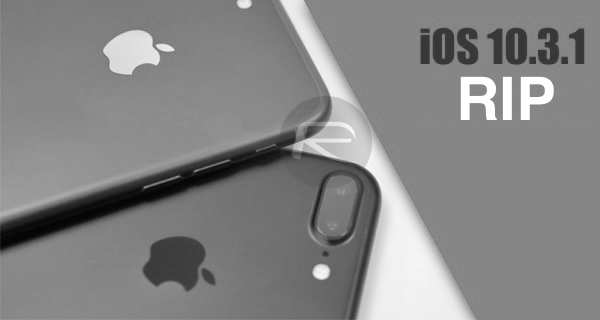 With Apple now no longer signing iOS 10.3.1 firmware, iOS 10.3.2 is now the latest and only public firmware being signed by Apple. In addition to iOS 10.3.2, Apple of course is also signing developer and public beta builds of both iOS 11 and iOS 10.3.3, later of the two is which expected to be made available for download to consumers very soon.

Last week, at MOSEC 2017 in Shanghai, China, a security research team which goes by the name of KeenLab demonstrated a working jailbreak for both iOS 11 beta and also iOS 10.3.2 firmware. This was the first time a jailbreak was demoed for both iOS 11 and iOS 10.3.2. And while there is no guarantee that KeenLab’s jailbreak will ever see the light of day, it’s still encouraging to see hackers continuously been able to bypass Apple’s security measures and checks in place for jailbreak and research purposes.

We will of course keep you updated on the state of jailbreak affairs but for the time being, if you are already jailbroken, our advice would be to stay on that lowest possible firmware unless and until there’s a jailbreak made available to public for latest firmware versions.