On the rare occasion that I go into Cydia these days, I very rarely check the top of the main page to see which SHSH that Saurik’s server has cached for me. At one point it was the first port of call and was almost second nature, having a quick glance to see if any new signatures had been saved on my behalf.

Thanks to a tweet from @Brendon800 who informs us that it looks as though Saurik is caching SHSH blobs for 5.0.1. Sure enough, after checking my own Cydia account, 5.0.1 signatures are present. 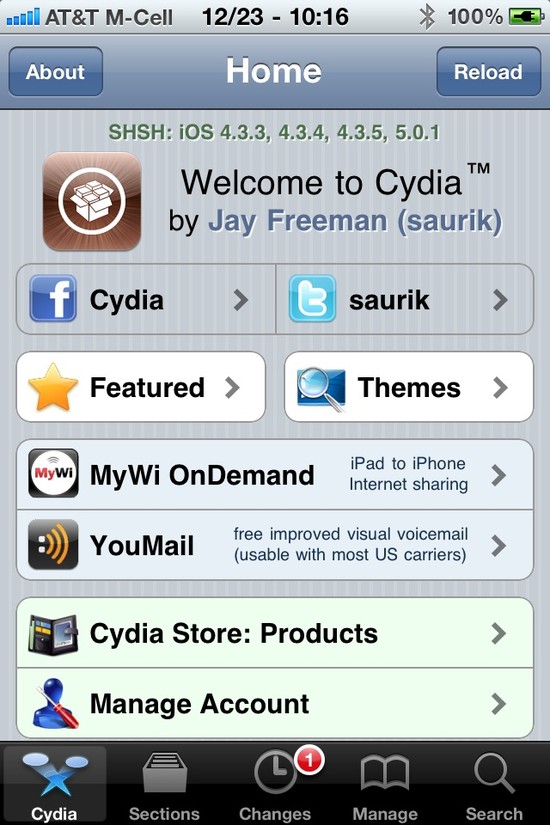 So what exactly are SHSH blobs and why are they required? An SHSH blob is a signature file which is verified against the Apple servers to ensure that the device is running the latest version of the firmware. The purpose of caching these signature files is to allow users to downgrade firmware, effectively restoring the device to an older version of iOS.

With the release of the iPhone 3GS; Apple decided not to just implement local protections, and instead made it so that every restore of a device would need to be individually verified by their servers. This is evident within iTunes during a restore, by looking at the top information bar you will be able to see ‘Verifying restore with Apple…’

The process consists of a simple challenge / response protocol which uploads a partial digest of the firmware file to Apple, which then decided whether or not to allow the restore. The caching of the users SHSH effectively allows this process to be bypassed, verifying the restore via Saurik’s servers instead.

An alternative to Cydia automatically performing this process is using the tool created by @ih8sn0w called iFaith which is dubbed as the first public SHSH dumper which allows users to dump the SHSH signatures of a devices current running firmware. Whilst similar in end result to methods like Cydia and TinyUmbrella, iFaith goes that step further and allows actual physical retrieval of the SHSH blobs. It is also worth noting that iFaith has no actual time constraints and can dump a devices signatures even after Apple has stop signing that firmware.

Getting back to Cydia, if indeed Cydia has started caching blobs once more, it comes at a perfect time with the impending release of the iOS 5.0.1 untethered jailbreak. The jailbreak, set to be released imminently by the Chronic Dev Team will more than likely be followed up by a point release from Apple to iOS 5.0.2 (or 5.1) which will attempt to close the exploit used in the 5.0.1 untether.

All seems well at the present for the jailbreak community with Cydia back in action, a jailbreak coming and a multitude of tools available for us to use.