Apple’s App Store continues to go from strength to strength with last year’s income reaching a staggering $64 billion according to CNBC.

That’s a hefty increase on the $50 billion that was earned during 2019.

While it will be difficult for anyone to prove where that impressive increase came from, it’s difficult to overlook the impact that a worldwide pandemic has had.

More people have spent their days at home than ever before and they’ve all been looking for ways to fill the time. The App Store, it appears, was one avenue they traveled down in their pursuit of entertainment.

Apple doesn’t share the exact details of how much money the App Store has raked in because it reports it under the Services revenue alongside all kinds of things including Apple TV+, iCloud, and Apple Music. As a result, these numbers shared by CNBC could be off – but it’s difficult to imagine them being too far off from the actual figures. 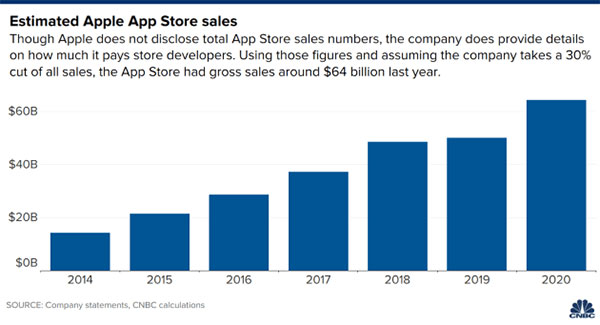 2020 saw the App Store come under more pressure than usual thanks to the high profile spat between Apple and Epic games. Developers have also suggested that Apple is less than a good host on the App Store, with many speaking out about the way it is managed. Apple did recently reduce the proceeds of App Store sales that it retains, although only for developers earning less than $1 million per year.