Apple might have just announced the HomePod mini, but it’s the big boy HomePod that’s getting a lot of attention right now. According to The Verge, the HomePod will get support for Dolby Atmos audio when it’s connected to a compatible Apple TV 4K.

Unfortunately, this won’t come to the new HomePod mini, however.

If you want to use a HomePod with your Apple TV 4K and get Dolby Atmos, you’re going to need to use the bigger HomePod.

Apple’s HomePod is getting a lot more useful as a home cinema speaker for Apple TV 4K owners. Apple has confirmed to The Verge that an upcoming software update will let the speaker output Dolby Atmos audio as well as 5.1 and 7.1 channel audio from Apple’s streaming box. The feature will work best when you have two HomePod speakers paired up, but also works with just one. The new $99 HomePod mini, though, will not support the new home cinema functionality.

Apple will be adding support for the new feature to a future Apple HomePod software update, although it isn’t clear when that will be made available. It’s currently in the hands of beta testers but there is no publicly available version right now. 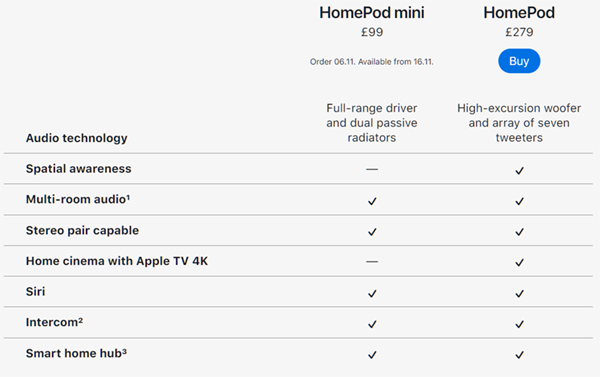 The HomePod will also gain support for surround sound functionality, according to Apple. the new home cinema support will again require an Apple TV 4K in order to work and will make use of the special awareness technology currently only available in the bigger HomePod.