If you were looking forward to grab an Apple Watch from an Apple Retail Store on the 24th of this month, you will have to hold that impulse for some time as a leaked memo has revealed that the device won’t be available in stores till at least the month of June.

Before Apple began accepting pre-orders for its first ever wearable, it was evident that the device would be available in limited stock at launch period, and understanding this rather well, the Cupertino company decided to restrict pre-ordering to online only.

The new piece of information, which happens to be from a memo sent by Apple’s retail chief Angela Ahrendts to employees, has her saying that, “Many of you have been getting questions asking if we will have the watch available in store on April 24 for walk-in purchases. As we announced last week, due to high global interest combined with our initial supply, we are only taking orders online right now. I’ll have more updates as we get closer to in-store availability, but we expect this to continue through the month of May.” Ahrendts further added that this decision was not an easy one but implied that the company finds solace in understanding that the Apple Watch is an entirely new product and it has found itself indulging in marketing tactics that haven’t been tried before in the past.

The Apple Watch launch stock was completely sold out in a few hours when pre-orders went live, with shipping dates being extended to as late as June for some models. It is not official but this shortage of stock seems to be attributed to limited supply of the watch’s vibration motor and the OLED display it carries. As for the number of units that Apple has sold, unofficial analysis puts the figure at over 2.3 million, but the company itself has yet to comment on it.

Ahrendts has also put at ease all those speculations about upcoming products meeting the same fate as the Apple Watch by saying: “I know this is a different experience for our customers, and a change for you as well. Are we going to launch every product this way from now on? No.”

The full memo is as follows: 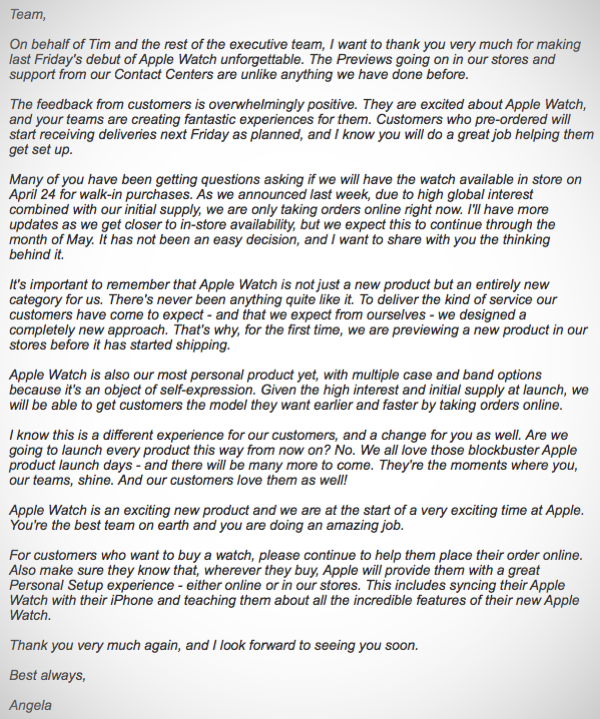 Be sure to check out our hands-on with the Apple Watch: