iPhone 6 Plus Or Samsung Galaxy S6? Kids Asked To Settle The Debate [Video]

The smartphone market is undoubtedly brimming with exceptional device manufacturers, which can only be seen as a good thing for the people that really matter – the end consumer. With that said, Apple and Samsung are clearly the two big players in the industry with the statistics showing that the makers of the iPhone and Galaxy S series – respectively – continually shift more units on a year-on-year basis than their rivals. So, Apple and Samsung are ahead of the competition with not much to separate the two, but if you asked a group of pre-teens to choose whether they’d prefer an Apple or Samsung smartphone, which way do you think they’d go? This video answers that age old question.

Business Insider has put together a relatively short video where a bunch of kids are asked to “settle the debate” that even the court system doesn’t seem to be able to settle; Apple vs. Samsung. In the video, kids ranging from seven to eleven years old are given an iPhone 6 Plus as well as what looks like a Galaxy S6 and asked to share their innocent and untainted opinions on the two devices as only kids can. After briefly looking at the iPhone 6 Plus, one smartly dressed ten year old kid remarks about Apple and says “it has one of the best phones and electronics that we know today”. Not exactly an expert opinion, and definitely not based on empiricism, but still interesting to hear it. 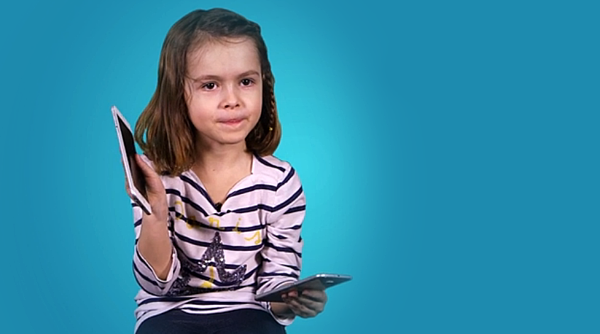 The oldest child in the video, an eleven year old girl, manages to pretty much hit the nail on the head with her assessment of Apple’s iPhone:

At one point when being handed the Galaxy S6 to compare alongside the iPhone 6 Plus, one of the children quips that “it has sort of the same design as Apple”. The video ends with the kids being asked to choose which device they would take ownership of if given the choice. The result? An emphatic 6-1 victory for Apple and its flagship iPhone 6. Not exactly the most scientific consumer test you’ll ever see in the smartphone industry but still extremely interesting to see and hear how opinions are formed on certain devices and company’s, even at such a young age.