Apple Pay Express Transit Working In Some Parts Of London

Apple hasn’t made any announcements, nor has it updated its website to reflect it, but it seems that some tube and bus routes in London are now accepting Apple Pay Express Transit according to MacRumors and some of its readers.

One of those readers reports that Express Transit mode now works on Transport for London’s U5 bus route that runs from Hayes to Uxbridge. Other stations serving the London Underground and rail system are also said to support Express Transit, although not all do.

TfL still says that Express Transit mode isn’t available yet although it did say that it was working with Apple to get it up and running. Given that news, it’s likely those who have seen it working are simply falling lucky and using routes that are live for testing purposes.

Express Transit mode is a subset of Apple Pay that doesn’t require the iPhone or Apple Watch user to authenticate via Face ID, Touch ID, or passcode. They don’t even need to wake the device in question – just place it near the contactless reader and wait. That increased speed of processing can be a big deal in a busy, crowded station.

Apple Pay Express Transit is already live in some cities in the United States, China, and Japan. It’s surely only a matter of time until it’s rolled out across London – and hopefully across the UK – completely. 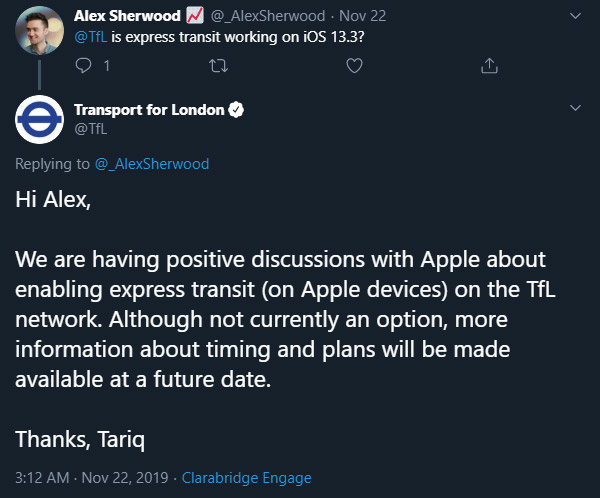