Hot on the heels of New York City, London’s Transport for London has confirmed that it is also working on bringing Apple Pay Express Transit to the UK capital.

The confirmation came after developer Aled Samuel tweeted the TfL Twitter account to ask when it would be adding support for Express Transit, with the response being that the company is already working with Apple to bring the feature to TfL’s transport links.

That can be a big deal if you’re at the head of a long queue at a London Underground station, for example.

Apple notes that you don’t even need to wake your iPhone or Apple Watch in order to use Express Transit, either.

With Express Transit mode enabled, you don’t have to validate with Face ID, Touch ID, or your passcode when you pay for rides with Apple Pay on your iPhone and Apple Watch. And you don’t need to wake or unlock your device, or open an app.

To use Express Transit mode, your iPhone or Apple Watch must be turned on, but they don’t have to be connected to a network.

You can have a payment card and a transit card enabled for Express Transit mode in the same city. If your transit agency accepts payment cards and transit cards, the transit card is automatically selected by the contactless reader.

When you pay for transit with Apple Pay, hold the top of your iPhone within a few centimeters of the middle of the contactless reader until you feel a vibration. You see Done and a checkmark on the display.

When you pay for transit with Apple Pay, hold the display of your Apple Watch within a few centimeters of the middle of the contactless reader until you feel a vibration. You see Done and a checkmark on the display. 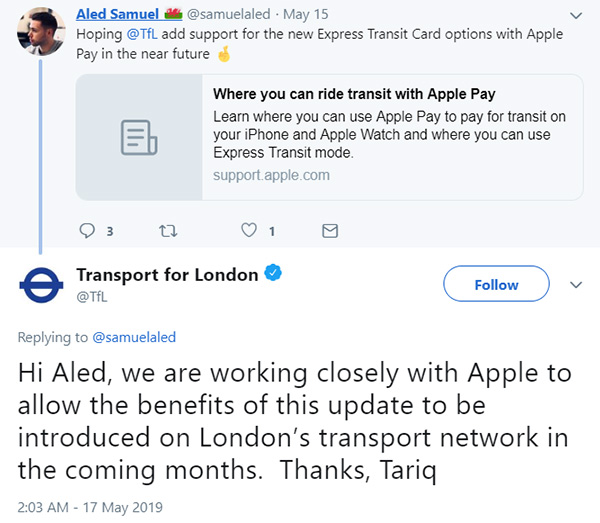 While TfL wasn’t able to give any specific launch date for Express Transit support, we expect to learn more about the details as the launch comes closer.