The world is going Siri crazy. Well, maybe not the whole world, but it seems that Apple’s personal assistant software has caused a storm with the iPhone 4S flying off shelves, television commercials popping up all over the place, the Cydia store being infiltrated by Siri based enhancements and even developers pushing out Siri clones onto other mobile operating systems. In the last few weeks alone we have seen the introduction of the ‘Evi’ iPhone application, as well as ‘Sara‘ making her way onto the Cydia store.

Having used them all, I can honestly say that Siri remains the most functional but there is no getting away from the fact that any application which comes close to mimicking Siri functionality on older generation devices will always become popular, even if it is just users initially downloading and testing the app. With that said, the newest pretender to the throne has entered the digital assistant world of iOS, with the popular Android application ‘Speaktoit’ being ported across to the iPhone. 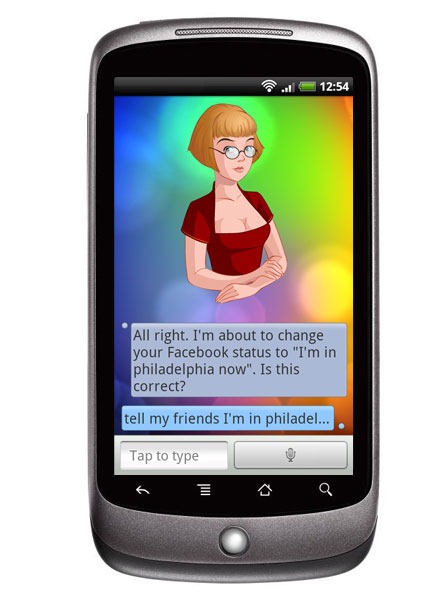 Speaktoit was launched onto the Android Marketplace in October 2011 and has already amassed over 1.4 million downloads gaining an average 4.5 user rating in the process. The accolades don’t stop there as the app was also named as a Top Ten Android App of 2011 by none other than The New York Times, although I can’t quite remember when they became the world’s authority on mobile software but nevertheless it is still praise indeed.

While Speaktoit has obviously enjoyed significant success on the Android Marketplace, we all know that producing an application for iOS is a different ball game given the almost dictatorial hold that Apple has over App Store submissions. So just how good is Speaktoit, and have the developers had to make any omissions from the app which gained so much success on Android to appease the Apple review team?

The application is pushed as a virtual buddy for the iPhone and iPod touch which uses natural language processing to complete tasks such as answering questions, looking up information, displaying maps, interacting with web services and converting things like currency and measurements. Six months ago, all of the above would have made for a pretty phenomenal application, but considering Siri can do all of that and interact with native applications to make diary appointments and so on, it may be seen to lack a little in functionality. 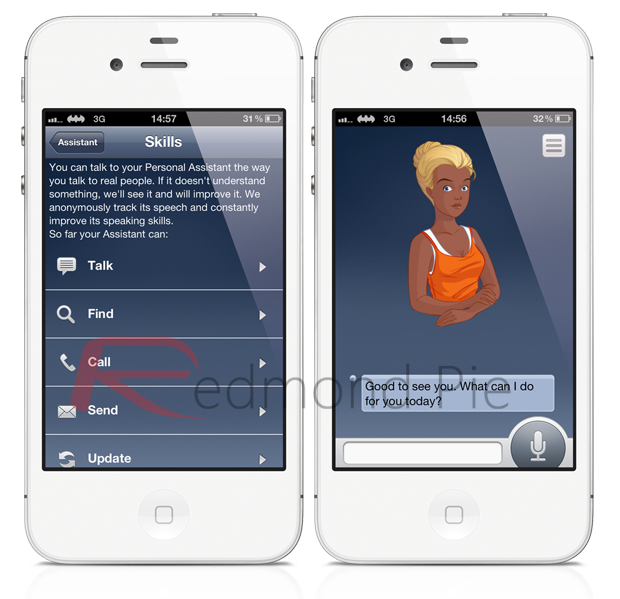 One the great benefits of the Speaktoit application is the ability to customize the interface that you find yourself speaking to. On those lonely nights that I find myself chatting away to Siri, I sometimes wish I had a person talking back to me and not a purple flashing circle. Speaktoit has me covered in that department with the ability to choose from a number of included ‘assistants’ to choose from. From a backend perspective, the development team are also striving to improve the application on a daily basis so users will find that the results will adapt and become smarter as time progresses.

Before I take a detour away from the Siri comparisons, just what benefits does Speaktoit have over the official Siri software? 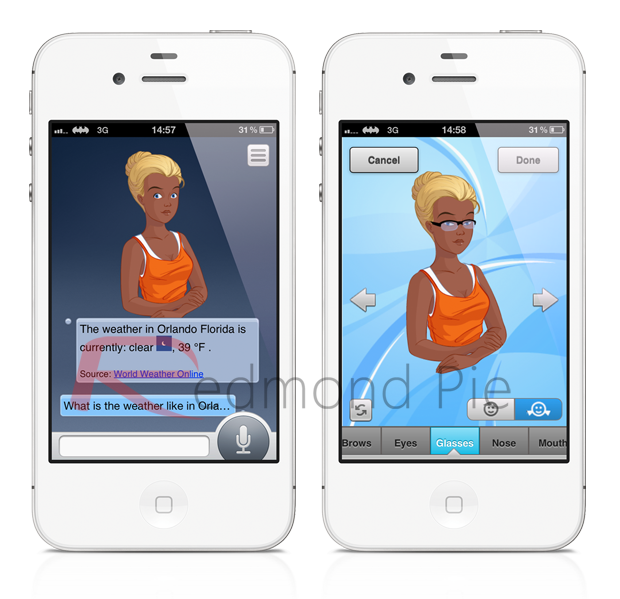 All in all, Speaktoit is a very polished and professionally implemented application which will no doubt provide huge benefits to those iPhone and iPod touch owners who do not have the current 4S model. The difficulty of releasing such an application at this time is that it will always be compared against Siri and unfortunately in most cases Siri will come out the victor purely because it is a natively built piece of software which has access to far more APIs that any external developer would have. Because Speaktoit is aiming at the non 4S owning market, the Siri comparisons can take a back seat making this app the best assistant based third party application I have used on the iPhone yet.

Download Speaktoit on the App Store now [iTunes Link]. The app is priced at $1.99, although the developers have said that it will be free of charge to the first 100,000 people on Valentine’s Day.