We love us some patents here at RedmondPie, and Apple is one company that just likes to apply for patents as if the fate of the world depended on it. Of course, this being Apple, their patent applications tend to get picked up by the technology press and then picked apart in the hope we find a future product or service hidden in there somewhere!

Today is one day when such a patent has reared its head, and this one appears to pertain to a spot of 3D technology, something that Apple has yet to bring to any of its devices, be they iOS or Mac.

The patent calls for a 3D system that would be available to iOS devices, allowing a pseudo-3D effect to be created using the magic of technology. Using Apple’s implementation, no 3D glasses would be required. The patent suggests that the new 3D mode could be activated using some kind of gesture, allowing users to switch between 2D and 3D modes at will.

The implementation, should it be used, would rely on sensors such as the accelerometer and compass to detect movement and then to allow the device to change the orientation of on-screen objects. This would create a 3D illusion for the user, thanks to added eye-tracking technology.

We have seen a similar technology demonstrated on an iPad already, and it works surprisingly well once you adjust to it. Adding some hardware and addition software support would only serve to make the experience even more enjoyable.

Smartphones with 3D technology are not a new idea. HTC, for example, has had a 3D-equipped Android phone on sale for some time now, with limited success. The gaming industry has also had its first handheld machine with 3D capabilities in the Nintendo 3DS, again with limited success.

With the debate still raging as to whether 3D in televisions is worthwhile or not, the same debate is sure to take place over smartphones. Do we need 3D smartphones, and if so, what will we use them for beyond the usual gimmicks? If Apple can make something from a 3D interface that isn’t possible with one less ‘D’ then we are all for it.

If Apple is going to give us some fancy spinning icons that don’t add to the experience though. then we just don’t really care. 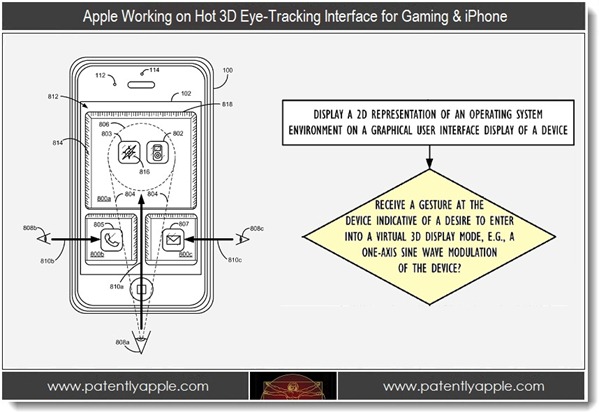