Ever since Siri released on the iPhone 4S about a couple of months, we’ve seen an outpour of Siri-like apps for Android. None of these apps, to be honest, have reached the level of ease-of-use that Siri offers, but this new alternative that has popped up today may just give it some real competition. Details after the jump!

News of the app comes from Boy Genius Report – a popular blog which covers technology and consumer electronics.

Developed by Tronton LLC, Cluzee is billed as an intelligent personal assistant that lets you, according to its introductory video, multi-task like a pro. It’s biggest advantage over Siri may just be the sheer variety of commands it can take. Cluzee gives you personalized recommendations, daily briefs (based on entries in Calendar), weather information, navigation, standard web search, local search as well as local news/traffic/deals, allowing you to update your Facebook/Twitter account, plan vacations, plan how much you’re eating and compare it with time spent exercising, manage notes. The bits after as well as include things which Siri can’t do natively. 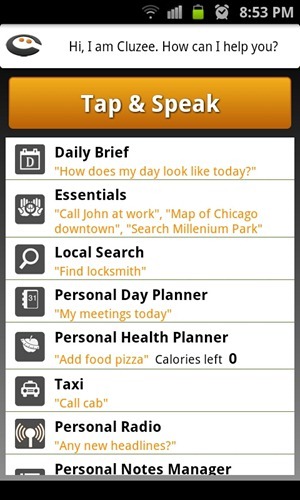 Talk to your phone! I can help you save your time and money. Ask me to do things just by talking to your phone. Do Siri features in iPhone 4S excite you but you don’t own an iPhone? I bring conversational interface, intelligence and many more capabilities on Android.

I’ve personally tested the app on my Samsung Galaxy S II running Android 2.3.3 and can confirm that it tends to work as claimed.

It couldn’t handle quite a few of my requests, but this is probably because of my not-so-native English accent. However, when I shifted to an artificial native-ish accent, it started receiving commands more accurately. So yes, my experience with the app wasn’t as nice as it was with Siri, but your mileage may vary depending on accent.

If you’re interested, Cluzee can be downloaded for free from the link embedded below. Do let us know of your experience with Cluzee in the comments section over on our Facebook page.