The ability to install modified versions of stock Android (read: custom ROMs) is one of the biggest reasons why enthusiasts opt for Android today. These custom ROMs can be slight variations of an original ROM, for example DarkyROM, or be heavily modded like CyanogenMod and MIUI. It can actually be quite addictive, this habit of trying out new ROMs and flashaholics – people who flash new ROMs very regularly – especially those of you who have the Samsung Galaxy S II will undoubtedly love this new dual-ROM-booting app we came across. Check out the details after the jump!

The app is called SGS2 Dual-Boot Setup (LolBoot) and it lets you install two ROMs on your Samsung Galaxy S II so you can switch between them whenever you feel like it.

(i) please note:
——————–
the dual-boot itself is still kind of in experimental stage and there are still some incompatibilities with some ROMs and other quirks.

The Samsung Galaxy S II is one of the most popular Android smartphones out there and there is an active community working to bring more and more ROMs to the device. There are almost 30 custom ROMs currently available for trying out on a Galaxy S II and, as such, developer Hellcat’s LolBoot will definitely be an indispensible tool for when you wish to switch between stock Android with TouchWiz and, say, CyanogenMod. 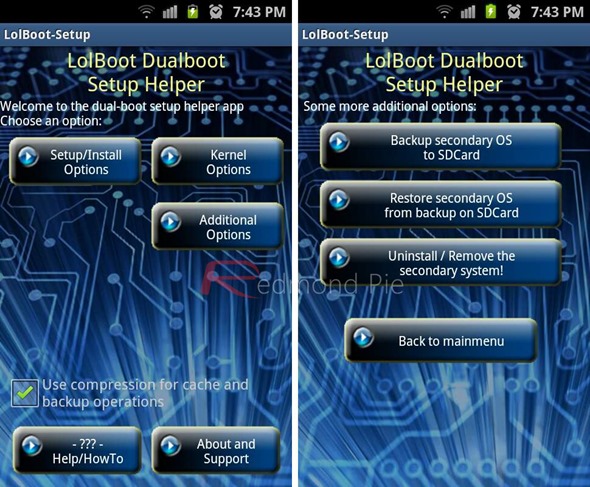 The app is currently in “experimental stage” and, as such, we don’t recommend the average user to try it out unless they really, really know what they’re getting into and know how to get everything back if something does go wrong. It, obviously, requires you to root your Galaxy S II first. Besides this, you must flash a custom kernel which should support dual-booting.

If you have an HTC device and wish to get in on some of the multi-booting action yourself, you should definitely check out BootManager which lets you boot up to five ROMs on your Android phone at once. Switching between them just requires a reboot.

If you’re interested, the app can be downloaded for free from the link embedded below. Once you’ve installed it, check out the official thread for help.