Android OS Coming Soon to an iPod touch Near You!

The same person who ported Android to the iPhone 2G and iPhone 3G is now working on bringing Android OS to an iPod touch (minus calling feature). We were anticipating this one for a while, and hopefully the port will see the light of day soon! 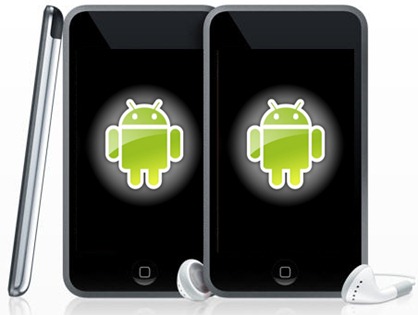 In a new blog post, Linux on the iPhone is reporting that the progress on Android to iPhone 3G is going quite well for now, though it’s taking a little time, but things are shaping up quite well and the binaries will be available in a short time. In the meantime, they attempted another port, Android on the first-gen iPod touch! Though it still needs some work before it is ready for primetime use. The extract from the blog post says:

Meanwhile, I am working on some stuff that is slightly more fun. Last night, I brought openiboot for the first-generation iPod touch up to scratch so that it supports all the features the other ports of openiboot support: sound, multitouch and SDIO (for WLAN) are the notable things I had to fix. Earlier today, I figured out how to drive the piezoelectric tweeter on the iPod touch.

So things such as multitouch drivers, WLAN and sound needs some work…

Hopefully, we’ll be able to roll out the iPod touch binaries with the 3G binaries and get on with the real work: power management and the little details that will make Android a truly viable alternative on our three early ports.

This is just great news. We’ll get our hands on the iPhone 3G binaries for the Android port the same day as the iPod touch binaries. We really can’t wait to try this port out ourselves! Sounds really exciting!

So is an Android port for iPad next? You bet! [via Linux On the iPhone]