Android Now Runs on an iPhone 3G Near You [Video]

Previously, we saw Android running on an iPhone 2G and we also posted a complete step by step guide on how you can dual boot your jailbroken iPhone 2G to run Android OS side by side with iPhone OS. After seeing Android run on an iPhone 2G, 3G (iPhone) users got curious on when they will get to try Android on their handset. After weeks of hard work, it’s finally done! iPhone 3G now runs Android. 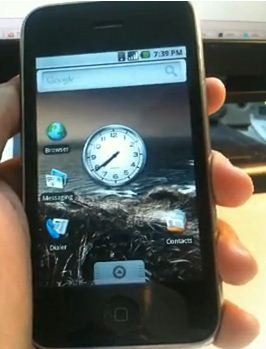 Porting Android to iPhone 3G wasn’t as easy as it was for iPhone 2G. But the great thing about it is that it is done and almost everything works as it should. In fact it works so well that you will actually feel that you’re using a “real” Android device.

Now you can use the Android OS to browse the web and run any application that does not require audio support, as well as send and receive SMS text messages over the cell phone radio.

We’ve also made several other improvements to the original port in this version. Along with many under-the-hood improvements and bug fixes, the Wi-Fi driver has been fleshed out with all the Android-specific extensions, making it more stable and reliable. We’ve also added an Android icon to the boot menu to make it more easily accessible..

Few things which still needs working is the audio support, which is currently not working for apps. But the groundwork for that has been laid. Improved power management settings and backlight controls will also be added before the final release.

Downloadable binaries are currently not available, but it will be in a couple of days time. We will surely post a complete how-to guide on how you can port Android to a jailbroken iPhone 3G once it is available. Stay tuned for this one. [via PCWorld]