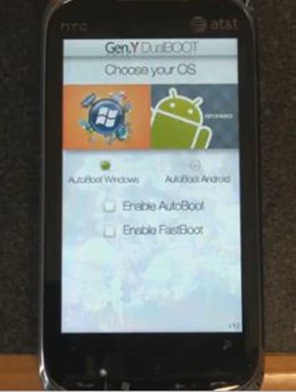 Gen.Y DualBOOT supports WVGA, VGA and QVGA devices and can be used to boot Android from both the internal and external storage (microSD) cards.

1. First get Android for your device and load the files onto a storage card. The easiest way to do this is to find the Android thread within the ROM Development forum of your device over at XDA. At the end of this post we’ll provide direct links for the more popular devices.
2. Download Gen.Y DualBOOT (choose the file based on your screen resolution) and install to main memory.
3. Reboot your device. You should be presented with the bootloader screen after a few seconds (once core Windows Mobile files are loaded). We’re hearing reports that for some device, this doesn’t happen. If that is the case, you’ll have to manually launch dualBOOT (not as fun, we know) by going to /Program Files/Gen.Y.

If the instructions posted above seems complicated to you, then you can give one of the custom Windows Mobile ROMs a try which has all the necessary stuff cooked into the ROM to dual boot Windows Mobile and Android from your Windows phone. Details on the custom ROM can be found at the BlogsDNA site.