Turn Your iPhone and iPod touch into iPad

Apple iPad, which was announced earlier this week received a mixed reaction from all over the world. Some found it as an oversized iPod touch, while others thought that it has the potential to redefine the way we will use our computers in the future. In a nutshell, iPad is indeed an oversized iPod touch/iPhone except for iBooks Store and iWorks Suite of apps. 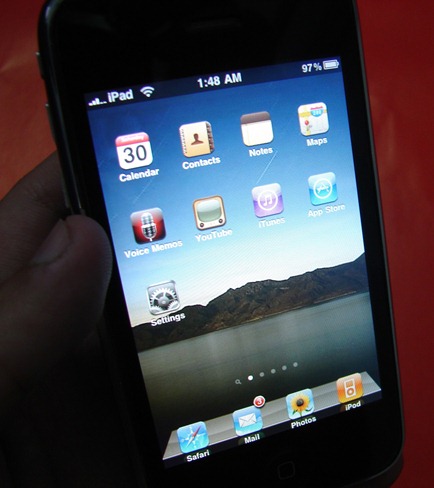 Since iPhone, iPod touch and iPad uses the same OS (iPhone OS), the look and feel is generally the same throughout the three iDevices except for the few tweaks here and there in the iPhone OS 3.2 running on the iPad.

Now if you want to make your iPhone and iPod touch to look exactly like the iPad, simply follow the steps as shown in the video below to get the same lockscreen and springboard background, carrier logo which reads “iPad”, an iBooks like app, New York Times reader, the entire Kindle books catalog and much more.

You will need to have a jailbroken iPhone to get it all to work. Follow the instructions posted here to first jailbreak your iPhone if you haven’t already and then download and install the following in this order.

Here is the video, showing each and every step in detail on how to turn your iPhone and iPod touch into an iPad.

You can ask me any question should you run into any problem getting all this to work on your iPhone and iPod touch.

Make sure you check out more themes from our iPhone Themes Gallery.