Google Rolling Out New Android Market 3.0.26, Here’s How To Get It Now Without Waiting!

Not a lot has been happening in the Android-sphere lately, but a few moments back, Google has announced a whole new makeover to the Android Market for all Android devices running Android 2.1 Froyo and up. 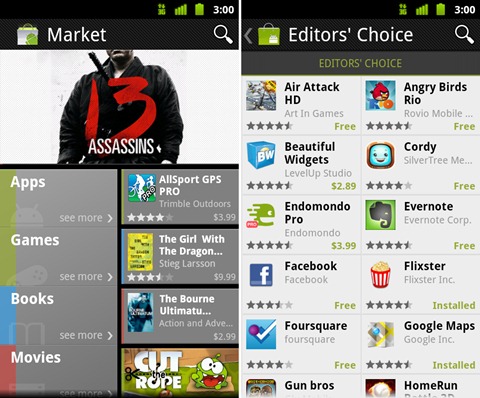 The new Android Market is rolling out slowly and gradually as we speak. It brings about a ton of new features, including a whole new UI, with support for renting movies and purchasing books, something which you couldn’t do in the previous offering of the Android Market.

The new Market is supported by devices running Android 2.2 Froyo or higher, hence if you’re running a version of Android below 2.2, then you’re kinda out of luck today. According to the official Google Mobile Blog:

Recently, we’ve been hard at work improving Android Market to give you new ways to find great applications and games, purchase books, and rent movies. Today, we’re releasing a new version of Android Market which makes all of these available on phones (Android 2.2 and higher).

You might be able to recall that Google announced movie rentals back in May at Google I/O conference along with Google Music Beta and Android 3.4 Ice Cream Sandwich. With Google Movie Rentals, you can rent out movies and watch them on your Android smartphone or Android tablet. The rentals are fairly priced in between $1.99 and $3.99,with a playback time period of 24 hours to watch the whole movie. But all this goodness is limited to the US at the moment, but we’re certain that in the near future, Movie Rentals will definitely land in other regions. You can check out the new Market in the video embedded below:

The new Market gives you a more of a Windows Phone 7-esque feel when you’re flicking through apps which you’re going to download, though not an original idea, but looks pretty neat. Google claims that the new Market is much more responsive and faster compared to the previous one, and discovering new apps or just doing a simple search is way more fun than before.

You’ll be delighted to find we’ve overhauled Android Market to make it faster, easier, and more fun to discover great apps, movies, and books. We’ve created more space to feature some of the most interesting content of the week on the home page. We’ve added more top charts, with newer, more relevant items, and we’ve made it easy to swipe through these charts as you browse the store. We’ve also introduced new collections of great content, like staff picks and Editors’ Choice apps.

Let’s just not waste more time bragging how good the new Android Market is and lets get to the golden question: How to get it? Well, Google is rolling the new Market slowly and gradually globally and you should be able to get it in a matter of days. Now the second question: Can I get it now? Yes you can! Simple download the .apk file from this link and install it. But before you do that, make sure you can sideload apps on your Android device; From your Android device’s home screen, press the menu button > Settings > Applications > and check “Unknown Sources” and simply download the new Market and install, that’s it!