iOS comes with several customizable system settings, yet they often require users to navigate through several menus in order to access them. In order to access several commonly used settings, the jailbreak community has created tweaks like the recently-released BBSettings, which adds handy system options/toggles to iOS 5’s Notification Center, but what if you just want to have some toggles added to your lockscreen? 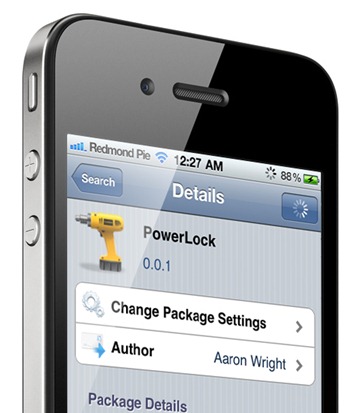 Thankfully, there’s an app for that, or at least a tweak! PowerLock is an easy-to-use jailbreak tweak that adds five icons to your lockscreen, right below the the clock. Using this tool, you have the ability to unlock the device (in case you’re too lazy to use the ‘slide to unlock’ slider), turn it off, respring the device, reboot it, set it into Safe Mode, turn Airplane mode on or off, toggle GPS, toggle Bluetooth and a lot more!  This tweak is slim and subtle, making it fairly unobtrusive when installed.

Users familiar with other jailbreak tweaks might find similarities between PowerLock and UISettings, another tweak that received some praise in its time. Yet, UISettings is always placed in iOS 5’s Notification Center, yet PowerLock is displayed on the lockscreen instead. More importantly, PowerLock lacks several features present in UISettings, such as Wi-Fi and Bluetooth toggles, which leaves it at a huge competitive disadvantage when compared to other utilities of its kind. Simply swipe to the left and you’ll see more toggle switches. 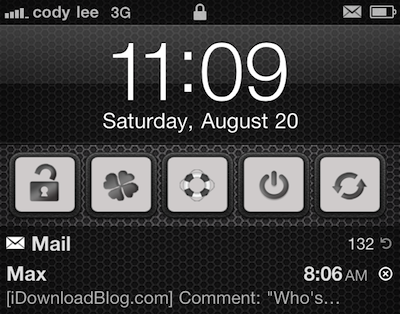 This tweak is available for $1.49 from Cydia. If you have the money to spend, feel free to give it a try, but I am more inclined towards other tweaks available for the same price, or for free. If you’ haven’t tried out BBSettings yet and are using iOS 5, I’d recommend you give it a shot first, since it’s absolutely free. Yet, if you’d rather like your everyday toggles to be placed on your lockscreen instead, PowerLock might be the way to go.