While the notebooks were previously in stock and ready to ship, Apple now says that new orders will not arrive until June 5th at the earliest. While it is possible that Apple has had some sort of manufacturing hiccup, this news would perhaps suggest that previous rumors surrounding new MacBook Pros being on the horizon are actually accurate.

Rumors of Apple having a refreshed 15-inch MacBook Pro in the works have been circulating for a little while now following reports that the current incarnation has not been as well received as had been hoped. The delivery window offered by Apple’s online store may also give us a clue as to when the updates will come, if at all, with June 5th being the day on which the WWDC 2017 opening keynote will take place.

Rumors of new MacBooks did have the keynote being the event during which the new notebooks will be announced.

Having last refreshed the 15-inch MacBook Pro back in October of 2016, a new model is certainly not expected given the times Apple usually leaves between updates, but with the current model having not proven as popular as Apple management had expected, it is believed that a new and improved machine is on the way. New Kaby Lake CPUs are expected to be at the heart of the refresh, and while delivery estimates for the 13-inch MacBook Pro have not yet slipped, it is not beyond the realms of possibility that both sizes of MacBook Pro could receive an update next month. 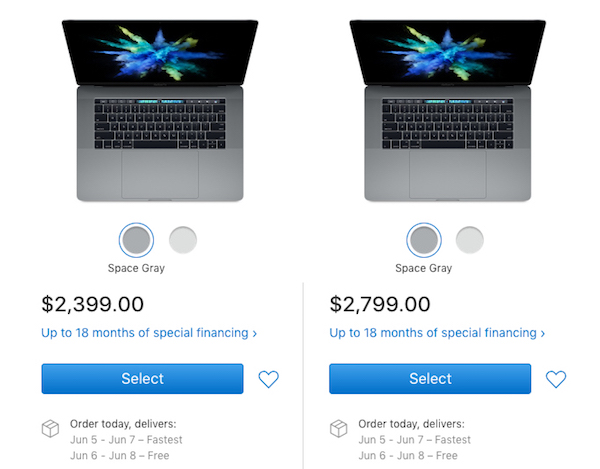 Apple has tended to save WWDC keynotes for software-related announcements, but that does not mean MacBooks have not been announced at the event before. 2012 say WWDC’s opening keynote give birth to new MacBook Pros, and we would not rule out the same happening again this year.