We should all know by now that the large Retina display of the iPad lends itself perfectly to drawing apps, a multitude of which already exist on the App Store. The Zen Brush app offers similar functionality to a number of other drawing apps that are already available but bundled with the unique concentration on allowing users to paint, write and draw with a beautiful and realistic ink brush rather than a never ending set of pens and pencils.

The large canvas of the iPad is perfect for an app of this nature, but the developers have also managed to transfer the functionality across extremely well to the more limited display of the iPhone and iPod touch, although it helps that Zen Brush has been optimized for the 4-inch screen of the new iPhone 5 and the fifth-generation iPod touch. The emphasis of the app is placed on allowing any level of users to be able to paint or draw perfect strokes that feel like using a real ink brush as well as being able to flick through different canvas types to compliment the strokes. 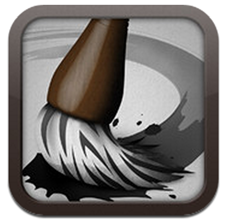 Zen Brush comes with a large set of background templates that allow users to quickly get up and running and creating paintings with minimal fuss. At the time of writing, there were sixty-two different backgrounds, all of which have their own theme and style depending on the type of drawing being created. The size of the brush can be easily adjusted using the extremely handy slider, with users being able to choose from 3 different shades of ink. The usual drawing app tools and utilities are available, such as being able to quickly erase brush strokes that don’t look as intended or undoing the last stroke with a simple press of a button. 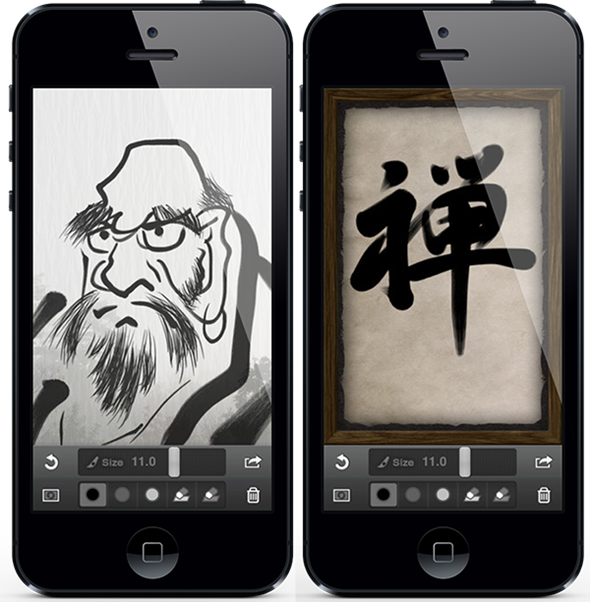 When the image is finished and looking perfect, it can be easily exported to the device’s camera roll and ready to be posted to the Twitter social network with a unique hashtag that allows all posted images to be indexed and searched by other users. Zen Brush is simple, functional and elegantly beautiful. Given the fact that only one brush type is available with only three shades, it is pretty amazing the level of detail that can be put into images that are created with the app. Of course, it helps if you can actually draw to begin with.

(Source: Zen Brush for iOS on the App Store)