Help And Support Sandy Superstorm Survivors In The U.S. By Making Donations To American Red Cross Via iTunes

Regardless of public opinion of Apple as a company, it is extremely hard to argue against the fact that they are a caring organization that regularly uses their power and infrastructure in order to provide help to various charitable organizations around the world. Apple are heavily involved in the (PRODUCT)RED campaign, and you may remember the help they provided during the disaster in Japan back in 2011 when they opened doors of Apple Retail Stores to provide shelter for stranded individuals. In response to the ongoing environmental issues in the United States, Apple has now started collecting donations to aid in the relief of those affected.

A dedicated charity collection zone has been set up through the iTunes Store that allows users to quickly and efficiently use the company’s extensive iTunes infrastructure to make financial contributions to the American Red Cross Society. The system is extremely simple and allows those who want to contribute to do so by purchasing a charitable donation package just like they would with an iOS app, or if buying a music album or a high-definition movie.

All donations that are collected through the iTunes page will be given in full to the American Red Cross Society who are heavily involved in assisting and supporting survivors of the Sandy Superstorm that is currently sweeping through the United States and surrounding areas. Those who are interested in making a difference and helping with the cause are able to checkout by making a donation of $5, $10, $25, $50, $100 or $200, which will be charged to the payment method that is currently held against the Apple ID being used.

By allowing users to quickly donate to the American Red Cross Society through iTunes, Apple is removing the need for customers to go through payment processes that are unfamiliar to them and will therefore greatly increase the donations received. The iTunes Store is a tried, tested and trusted method of purchasing digital goods and makes a perfect gateway for donations to charity and worthwhile causes such as this one. 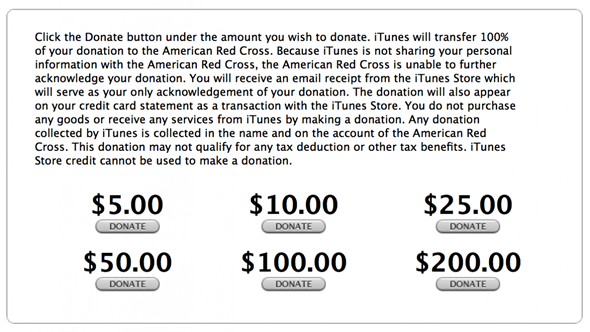 It looks as though the charitable purchasing options could only be supported through the United States iTunes Store, at least for this cause. Those who choose to make a donation of any amount can rest assured that no information is shared with any third-parties, with the transaction being handled just like any other iTunes based purchase.