Yes you read that right. You can now download public beta 3 of macOS 10.13 High Sierra for Macs and tvOS 11 for Apple TV.

The immediate release means that testers registered with Apple Beta Software Program can now download the latest versions of the aforementioned platforms, which also means that Apple will have a larger testing pool feeding issues back to its internal engineers in order to get both platforms ready for a prime time release. Anyone who follows Apple’s release cycle will likely already know that this public beta 3 is essentially the same version of macOS 10.13 High Sierra and tvOS 11 which was released to developers earlier this week under the beta 4 moniker. 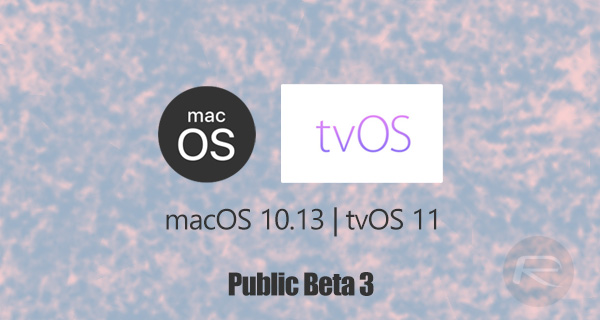 macOS 10.13 High Sierra Public Beta 3: With macOS High Sierra you can really tell that Apple has tried to go that extra mile to ensure that Mac owners get the best possible value from what will ultimately be a free-of-charge upgrade to macOS 10.13. The platform comes with significant improvements to Safari, including having the ability to block automatic video playback on websites. There’s also a new and powerful Mail app as well as an improved Photos app which benefits from machine learning and enhanced editing tools.

Siri has been improved across the board, which, of course, filters down into macOS High Sierra, and there’s new and improved iCloud File Sharing which lets multiple people collaborate on a single iCloud Drive document. Apple has also used this upgrade to High Sierra to ensure that macOS is now built on top of APFS rather than HFS.

If you love the sound of what Apple is doing with macOS 10.13 High Sierra, but are yet to get involved in the action, then you can of course still register yourself for the public beta program. We have included everything you need to know about doing that in one place right here. Already have previous version of macOS 10.13 public beta installed? Grab the latest update as OTA from the Updates tab of the Mac App Store.

tvOS 11 Public Beta 3: tvOS is one of Apple’s fastest-growing platforms, but version 11 certainly isn’t as impressive as the bump in other platforms. This new version comes with an automatic light and dark mode displayed depending on the time of day it’s being used. There’s also right-to-left language support and new backgrounding and notification capabilities which should ensure that we get richer app experiences uploaded to the tvOS App Store. And of course, not to forget the brilliant AirPlay 2 feature.