You Can Get A Free Chromecast When Buying Moto X, Here’s How

Motorola is showing no sign of slowing down its quest to get good quality Android devices into the hands of consumers without charging the Earth for them. After launching the Moto G and sewing up the budget Android market with a device that belies its price tag, Motorola is now seeing its Moto X smartphone drop in price with an aim to really squeeze into the Android market.

Motorola had previously dropped its Moto X to just $399 off-contract following its even more impressive Cyber Monday price of $349, meaning that anyone looking to pick up a well equipped Android phone doesn’t need to spend a fortune or opt for something less capable instead. Starting a couple of days ago and running through January 14th though, Motorola has managed to make its Moto X an even better proposition by announcing that it will also ship a free Chromecast dongle with each device bought through its store. Everyone loves freebies, but whereas we usually get left with a free case that we’ll never use, we rather like the idea of getting a free Chromecast that would normally cost $35. 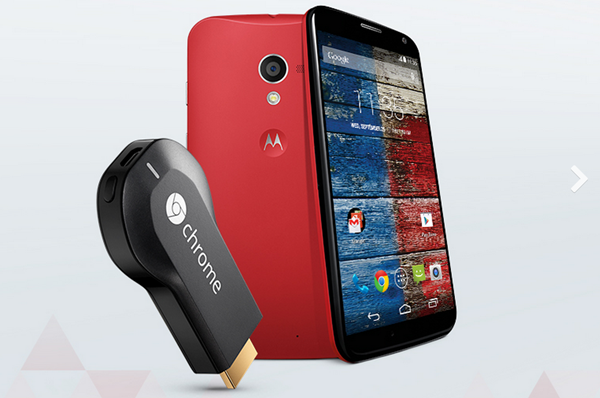 The deal offers great value for anyone that was looking to pick up a Moto X and a Chromecast separately, and is live on Motorola’s online store right now. If you want to get in on the action right now, you can enter the promo code "STREAM" at checkout (without the quotes of course), which should snag you the free Chromecast as part of your order. Groovy.

Motorola’s Moto X is available in either 16GB ($399) or 32GB ($449) and offers good value as far as performance and price is concerned. The free Chromecast is an HDMI dongle that allows streaming of content to a television in a way similar to how and Apple TV would work with AirPlay. Both, together, make a great combination and at the price Motorola is asking, you really can’t go far wrong.

There’s something of a price war currently underway in the smartphone space, with Motorola seemingly at the center of everything good that’s happening in the quest to make top quality smartphones more affordable.

It would’ve been an even sweeter deal if Google had tossed a free Chromecast along with the purchase of a Nexus 5. But still, the Moto X is a great device, and there’s nothing wrong with getting free stuff now is it?

Point your browser to motorola.com/us/home and get started!