If you happen to be one of those people who keep abreast with technology and open-source projects, or additionally just love movies and media in general, then the chances are; you will already be familiar with the extremely popular XBMC application. Over the last few years, XBMC has dramatically risen in popularity, with users loving the fact that it is not only free and open-source, but also cross-platform and extremely powerful. The project itself is supported by a host of volunteers from around the world, and although it is popular on things like the jailbroken Apple TV, it really comes into its own when installed and used on a high-end media PC.

The XBMC software is officially available for Linux, Windows and OS X platforms, but as previously mentioned, it has found its way onto things like the Apple TV thanks to some enterprising developers, and now it seems that it has started the transition into being a media powerhouse on Android devices also. The team behind XBMC had recently lifted the lid on their work, which involved bringing a stable version of the media app to Android devices, one that doesn’t require any rooting and will run as a standalone app on any tablet, smartphone or set-top box that runs Android. Until that time comes, an Android developer known as kemonine96 has produced some working nightly builds that should satisfy the hunger of most.

As part of the process, the developer has entirely rebuilt the CrystaX NDK which the XBMC software requires, and in doing so he has made some fantastic modifications to offer additional support for non-NEON devices that will certainly bring a smile to the faces of those who possibly have devices like the Advent Vega, Kindle Fire, LG Optimus or the HP TouchPad amongst others. The produced build has been split into two instances, with one being available for Tegra 2 devices and the second one offering XBMC for NEON devices like the Galaxy Nexus, HTC ONE V and Xperia S.

Although the builds are a fantastic step in the right direction on bringing XBMC to the masses of Android users, they are currently without their issues, something that you would expect from nightlies. Issues such as the screen-flickering and degrading battery life are known. as well as degraded or no available audio at all. Thankfully, it isn’t all about known problems and there are a number of great working add-ons that are currently supported, such as BBC iPlayer, TVCatchUp and The Trailers plugin. 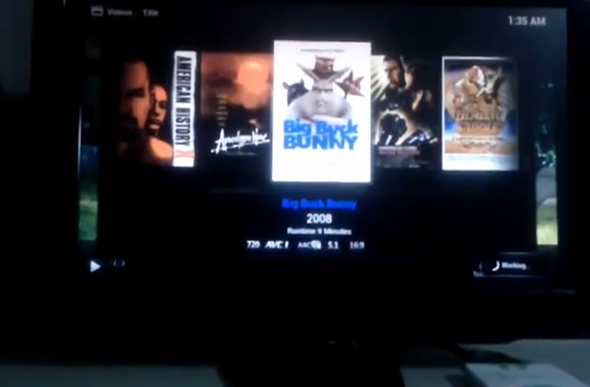 If this Android XBMC port is something that interests you then head on over to the official developer’s thread on the subject to see the full list of supported NEON and non-NEON devices, as well as the currently known issues.