There has been a lot of talk about how Microsoft and retailers would actually deliver the final Windows 8 product to the users, and just to our liking; Amazon has shed a little light on the subject and revealed the official Windows 8 packaging in the process.

A variety of new Windows 8 related packages have appeared in the listings on Amazon’s website and relate to users who want to upgrade to Windows 8 from a previous installation of Windows, such as XP, Vista or Windows 7. The current listings on the site show upgrades for Windows 8 Pro and Standard edition, as well as an N version of Windows 8 Pro that specifies that the software does not come with the Windows Media Player app as part of the package.

All three offerings on Amazon show an expected release date of October 26th, but it is only the Windows 8 Pro and Windows 8 Pro N version that come in actual physical media in the form of a DVD-ROM. The upgrade package to Windows 8 Standard contains a product key card only with media being in the form of a license that allows users to upgrade from Windows 8 Standard to a Pro version. Attention is also being paid to the rather eye-catching product packaging that is shown in the listings with each product coming with a different design that match those that were leaked earlier in August. 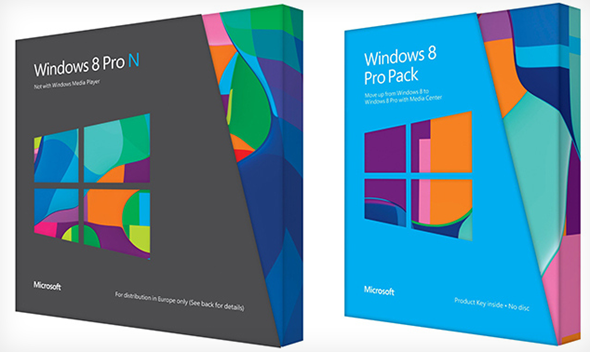 As you might expect, the listings are a little bit shy on the finer details and don’t provide any full information other than letting users get informed when the product becomes available later on this month. In addition to the lack of information, Amazon is yet to associate any pricing with the listings but we have already heard from the Redmond based company that existing Windows users will be able to upgrade to Windows 8 for $39.99 through a digital download or pay an additional premium of $30 on top of that for a retail purchase and a physical disc. With the October 26th release date looming near, it will be extremely interesting to see additional listings popping up on other supporting retailers sites to see if they provide any additional early information or offer any kind of deals to users.