As minor a detail as it may seem, it’ll be the packaging you see at every electronics store for the next 3-4 years, and images of the retail Windows 8 packaging have leaked into the wild courtesy of TheVerge. In-keeping with the general theme of the operating system as a whole, the boxing of Windows 8 and Windows 8 Pro both have a clear reference to the Metro interface, with the Pro edition coming in a charcoal gray color contrasting the whiteness of the standard edition.

With Microsoft offering such a sweet deal for early online upgraders, it’s unlikely anybody looking to jump ship to Windows 8 will want to pay double the price for the retail edition. Then again, some certainly prefer the security of having a disc around for peace of mind, and those that do will be met with the, shall we say, acquired taste that is the new design.

As a huge fan of minimalism and simplicity, there are just too many colors there for me to consider the packaging anything other than an eyesore, but unlike many software products, consumers seldom intend to purchase a copy of Windows, only to have their mind changed by something as negligible as the packaging.

Windows 8, Windows 8 Pro, and Windows RT will be pre-loaded onto new PCs, notebooks and tablets from its October 26th launch date, and those looking to upgrade will be able to purchase their copies in stores or download. With Apple’s OS X Mountain Lion having had a fantastic download-only launch, one suspects many will be grabbing their copy of the new operating system online, and the cheaper price offered to those that do so may prove too tempting for the majority. 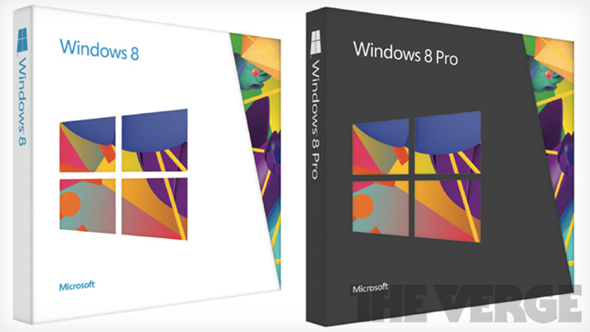 Microsoft did its part in saving the world by reducing packaging weight of the retail Windows 7 from the ghastly Windows Vista, and we’ll have to wait and see on launch whether the next version has been scaled down once again.

With the launch of the Microsoft Surface also arriving on October 26th (the ARM edition, anyway), it’s not unlikely the company’s first delve into the tablet market will be the talk of the town. Having been impressed by what we’ve seen so far, we cannot wait to see if the slate lives up to its billing, and although many ardent techies will be cursing the lack of an initial Intel version, it’s likely curiosity will force the spec-aficionados to cave and purchase the watered-down version.