It may be one of the least well-publicized additions in iOS 9, but WiFi Assist has the ability to be one of the most useful, yet almost invisible features to ever find its way into an iOS update. You may have already benefited from its presence, but the chances are you don’t even know it.

For those unfamiliar with it, WiFi Assist is intended to correct one of iOS’s long standing ills, which has seen iPhones cling to WiFi connections far too long instead of failing over to cellular as you might expect. That willingness to stay attached to a WiFi signal has meant that iPhones have historically stopped working while the phone decides whether to kill the connection or not, invariably only doing so when there’s zero WiFi signals left to be found. And that’s bad.

With WiFi Assist, iOS 9 now drops its connection to weak WiFi connections much, much sooner. That means a more graceful switch from WiFi to cellular – all done automatically – whenever WiFi becomes sluggish due to weak signals or have poor connection speeds to the point where it becomes unusable. It works like magic. No more manual switching over from WiFi to cellular!

WiFi Assist should arguably have been around much sooner. Now that it’s here, though, you’re going to want to get it turned on, else you won’t get the benefit of it.

Here’s how to do that.

Step 2: Tap Cellular. In some regions this would be Mobile Data.

Step 3: Scroll down to the bottom and flick the switch for WiFi Assist to On. 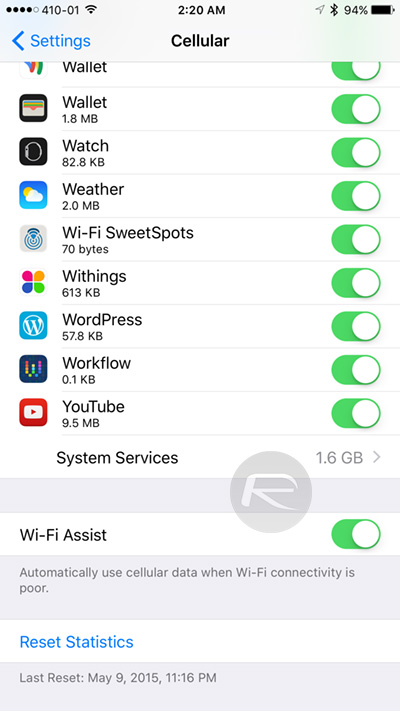 That’s all there is to it, and you should now notice that your iPhone will be much, much better at disconnecting from weak WiFi signals than it was before. That’s a bigger deal than it sounds, especially for those who find themselves commuting to and from WiFi zones multiple times a day or have a problematic WiFi connection at home.