It’s always amazing how well an artificially limited or restricted release can perform when it comes to generating hype for a new software package or game. It was recently announced that Epic Games would be issuing early access Fortnite Battle Royale codes for iOS gamers, giving them the ability to experience the next-generation of hyped-up mobile gaming ahead of time.

That code drop may not have happened yet but we may just have some good news for those amped up would-be Fortnite gamers.

We already know that that Epic Games will be using Apple’s iOS platform as the testing ground for this new mobile version of the Fortnite Battle Royale extravaganza.

Once the stability of the game has been proved and the company feels that it is in position to introduce more users across different platforms without negatively impacting the stability of the game, then it will be opened up in a closed capacity to Android device owners through invite codes before finally being released to the general public as a free-to-download and free-to-play experience. But, just when will those initial codes be issued?

This is by no means a guarantee as there hasn’t been any internal information leak that we know of but we believe that Epic Games will be issuing the initial iOS-only invite codes this coming Thursday, 15th March. 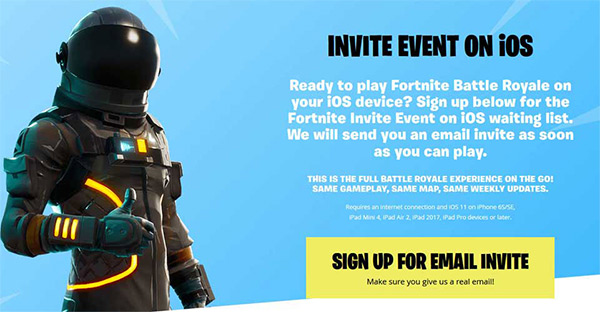 The reasoning and thought process behind this is that large patches and important announcements for the title are typically made on a Thursday, leaving Epic Games in a perfect position to capitalize on the current hype and make the most of the excitement surrounding Fortnite Battle Royale. If accurate, the release would mean those iOS device owners who signed up via the early-access beta link would be able to start their Fortnite experience within the next 48-hours or so.

The official Twitter account for the Fortnite Battle Royale game has also tweeted to ensure that gamers understand that no invite codes have been issued yet. This is in direct response to scammers and fakes who are trying to lure followers and subscribers in with the promise of being able to access the game early.

We have not sent out any mobile invites yet.

So, if you have registered yourself with an iOS device for early access, you best start to get yourself ready for what’s to come in the next 48-hours.