We see all manner of video clips whereby some of our favorite gadgets are destroyed or otherwise irreparably harmed. Sometimes, there’s a practical reason for the destructive behavior, such as to test the robustness of a particular product in a given situation. However, it’s frequently the case that these coveted devices are trashed purely for entertainment, and the perverse pleasure of the on-looking tech world. Case in point, a new video demonstrating what happened when an iPhone 5s was run over by a train. Yes, you read that right – a train. Below, you can catch the video, and we’re pretty sure that you won’t want to miss this one.

Even though we’ve seen smartphones emerge largely unscathed after being run over by a car, a train is a completely different kettle of fish, and even though the iPhone 5s is quite tough, it’s certainly not ruggedized enough to compete with the overbearing weight and force that you get with those track-tethered juggernauts. 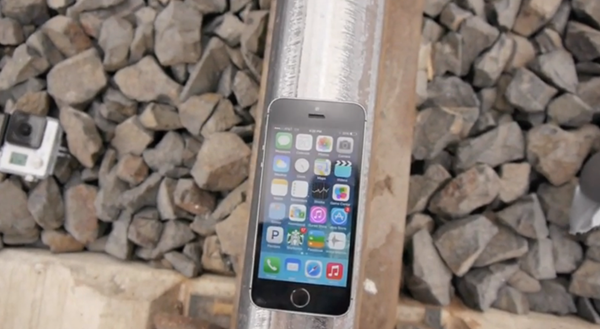 Prior to watching the video, there was a part of me that speculated on whether an iPhone 5s could somehow overcome the sheer monstrosity of the train and emerge in some kind of working order. Such a notion almost defies logic, but given the car situation and the continued improvements being made to build quality throughout the smartphone industry, I still harbored the slightest glimmer of hope.

Unfortunately, this was one David vs. Goliath battle that the poor iPhone was never going to win, and like most objects hit by trains, the iPhone 5s was scarcely recognizable by the end, much less able to power on.

Nevertheless, this is one of those videos that simply cannot be missed through pure intrigue, and if YouTube user TechRax continues coming up with these smashing tech videos – if you’ll excuse the pun – then we’ll surely have an idea of how the iPhone and its peers cope with other extreme, unlikely-to-occur situations.

Anyway, you can check the entire clip below, which we’ve embedded for your viewing pleasure. Yes, the outcome is grimly predictable, but it’s still a must-see, so give it a watch, and as ever, do leave your comments via the usual mediums.

Would you ever do this to your iPhone just for entertainment purposes?