Gold iPhone 5s Gets Dropped, Dunked Into Water, Then Shot At With A 50-Cal. Round All In Slo-Mo [VIDEO]

Whenever a new gadget is released, the guys of the YouTube channel RatedRR take it upon themselves to basically wreck said device in the most brutal yet spectacular fashion. With the iPhone 5s being the biggest gadget released for a number of years and the gold model in such short supply as millions still await the shiny new color variant of Apple’s flagship, the following footage, which shows the remains of the handset after a love-in with a 50-caliber bullet, may be unsuitable for some viewers.

From what we’ve been hearing, those lucky enough to be in ownership of the Gold iPhone 5s should clutch it with both hands, and count themselves lucky that they managed to get hold of it before the initial supply was exhausted. But the RatedRR guys, as ever, either didn’t get the memo, or simply decided to destroy the memo in their typically destructive manner. 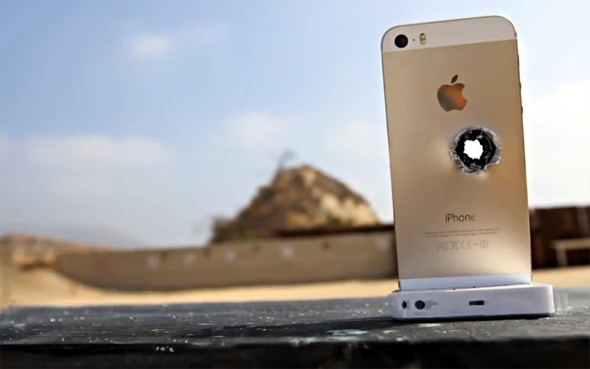 Anyhow, the video starts with your standard drop test, which gives a neat slow-mo of the beginning of this particular gold iPhone’s inevitable demise. It’s then submerged in water as if it were one of the dishes as opposed to a smartphone costing hundreds of dollars, but after a short dip and some time in the desert heat to recover, the device emerges in full working order, scathed only by a screen crack from the first drop.

But while drop tests and water tests offer a fairly decent idea of whether our own iPhone 5s models could, at least in theory, survive these kinds of situations, the 50-caliber test is simply for show, allowing us to see how feebly the popular gadget becomes when faced with a big, bad gun.

The result is, as you’d imagine, pretty conclusive; the iPhone 5s may be a lot of things, but bulletproof it most certainly ain’t. Still, as I say, that’s not really the point; the point is to enjoy witnessing a 50-caliber round hit the device you most probably want right in the torso. Yes, I too can see the irony here.

The iPhone 5s is a very sturdy handset, but while it includes plenty of game-changing features, is not quite ready for war just yet. Perhaps stronger armor can be thrown into the ideas pool of the iPhone 6?