Google Glass has become a source of interest in the recent weeks, with the company first opening up the expensive and highly advanced eyewear for sale for just a day, and then making it available for everyone in the US. It seems clear that Google is out to ensuring some rather heavy marketing for the Google Glass lineup, and their latest stint with tennis sensation Roger Federer and Stefan Edberg is sure to help that cause. Apparently, the two tennis giants stopped by the Google campus to try on the new eyewear, and take on each other in a friendly match that offered a unique perspective into the game.

According to reports, Federer donned on the Google Glass apparatus while he took on Edberg for a friendly game on tennis, while the action was captured by the eyewear and broadcasted onscreen, giving the audience a look at the game from the Grand Slam champion’s point of view, literally. Of course, it won’t make anyone a champion themselves, but it goes to show how such technology can be used by professionals from different walks of life to not only their own benefit, but for the sake of others’ improvement as well (not to mention, it’s quite entertaining to see the game this way). 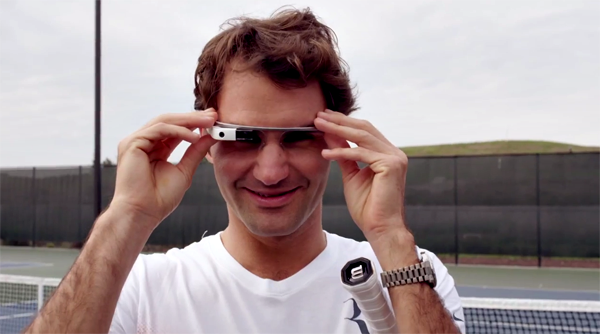 Google Glass has always been a very expensive piece of hardware, and until recently, it wasn’t even possible for everyone to get their hands on one. In the recent weeks, the Mountain View company has taken a different approach towards marketing and promoting its device, and by showcasing how different people can take benefit from the rather coveted hardware, it’s gaining steady increase in the interest towards the product. It also doesn’t hurt to have celebrities showcase Google Glass, since the message that they can get across is hard to replicate otherwise. Let’s see if this spells something different for the technology world.

It’s also interesting to note that Google Glass is hardly the sole player in this arena anymore. Although it’s unfair to call them competitors, others, too, have started working on devices that are somewhat similar to Google Glass, indicating that the market might finally be ready for something beyond just smartphones, and embracing a merger between the virtual and real world.