Since the 64-bit Apple A7 processor came into play with the iPhone 5s, users have found instances of lag and disruption to be few and far between. But whereas software updates have still offered performance boosts for these newer devices, those in ownership of the iPhone 5 or earlier must dredge every little bit of extra speed they can get from continually improved editions of Apple’s iOS. With iOS 8.1.3 having been closely followed by iOS 8.2 beta 5 download during the past week or so, we can now take a look at how these new builds compare with one another on two less recent handsets: the iPhone 5 and iPhone 4s.

The iPhone 4s’s performance on iOS 8 has been under the spotlight constantly, with many users complaining of issues ranging from crashes to general slowness. This is, in a way, to be expected of a device that is coming up for its fourth birthday this year, but having given the 4s the green light to run iOS 8, the Cupertino must continue optimizing the latest software for those on the less-able hardware. 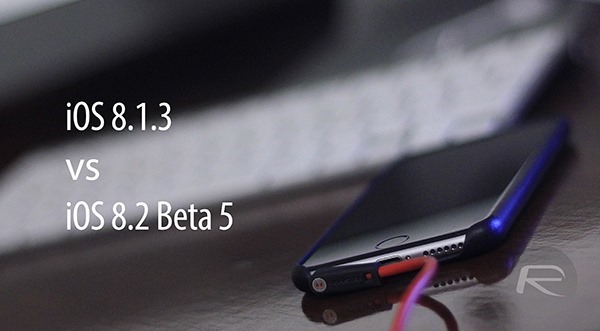 YouTuber kabriolett has put both iOS 8.1.3 and iOS 8.2 beta 5 under the microscope in a side-by-side clip of them running on identical iPhone 4s setups, and for added perspective, follows the video up with another run-through of the software running on an iPhone 5.

In the first part of the clip, as you’ll see, there’s not a great deal to tell between them. Given that iOS 8.2 is still in beta, and thus not yet ready for prime time, and there’s reason to suggest that further speed enhancements may be added before the OTA’s arrival, but on this evidence, it’s looking very much like Apple has reached a plateau in terms of how fast it can get iOS 8 running on the iPhone 4s.

Unfortunately, kabriolett erroneously switches sides with the second part of the video, showing iOS 8.2 on the left as opposed to the right. Again, though, there’s not a lot between the two in terms of general speed, and if anything, the current iOS 8.1.3 is a tad quicker than its newer counterpart.

It’s very likely, given what we saw with the iPhone 4 last time around, that iOS 8 will be the iPhone 4s’s last. Sure, the iPhone 4s manages a better performance on iOS 8 than its predecessor did on iOS 7, but it’s still below what we’ve come to expect of Apple, and should the A5-running handset be carried over for iOS 9, it would be disastrous for the end user.

Anyway, check out the video below, and as always, leave your thoughts in the comments.