One of the most well-known utilities that have been built into iOS from the very beginning is the Calculator app, which does a great job for basic calculations, and sometimes not-so-basic ones. Yet, sometimes we only wish that there was an easier and quicker way to perform calculations in iOS: if you have jailbroken your device, now there is. 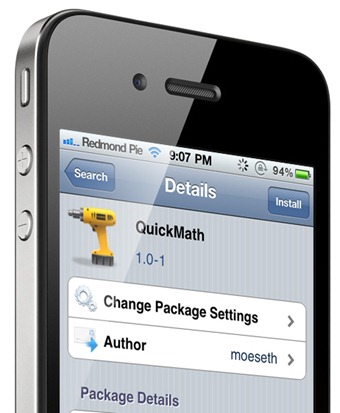 This tweak works rather simply, requiring no additional configuration once it’s installed. Simply swipe your finger to the left or tap on your home button once to bring up Spotlight, then type in a simple equation, such as 9 + 4. Once you hit Search, the result should be displayed on the search field, although oddly-formatted. Addition, subtraction, multiplication and division are all supported by this tweak, yet don’t try to go any further, since this tweak is aimed at performing simple math only, at least for now.

For better or for worse, QuickMath doesn’t make any user interface changes to iOS whatsoever, making it impossible to spot. Yet, a custom virtual number pad would have been nice, yet I realize how hard that would be to implement without making Spotlight itself more difficult to use. 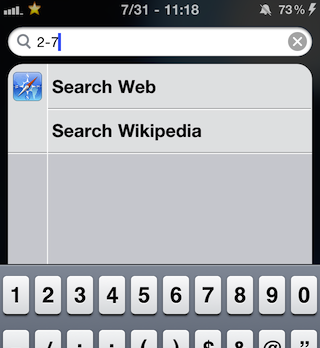 This tweak requires iOS 4.0 or above, just like most tweaks being released today. You can follow our step by step guide posted here to jailbreak your iPhone, iPad or iPod touch on iOS 4.3.5 using Redsn0w (or PwnageTool), or on iOS 4.3.3 using Redsn0w, PwnageTool, Sn0wbreeze & JailbreakMe (that last one being the easiest). You’re advised to have some previous knowledge on standard iOS diagnostic tools before proceeding, but don’t worry, you will get a hang of them pretty quickly!

This tweak is available from Cydia under the BigBoss repository, which should be set up by default on all Cydia installations. The price? Free.