With iOS 6 out for a few months and iOS 6.1 right around the corner, many are already wondering where Apple might next take its mobile operating system. After a few releases with little user interface changes, it is plausible that Apple may be working on quite a lot of changes for its upcoming release, iOS 7.

This concept also depicts third-party widgets, which have been long awaited in iOS. A couple of years ago, with the release of iOS 5 which saw the first iteration of Notification Center, Apple shipped a few built-in widgets, including Weather and Stocks. It has never since, however, allowed developers to create their own widgets, leaving this for the jailbreak community to figure out. The concept depicts Twitter and Instagram functioning perfectly, leaving iOS power users like myself crossing our fingers hoping that Apple finally allows for third-party widgets with iOS 7.

Check out the concept for yourself in the video below:

Traditionally, Apple introduces major upgrades to its mobile operating system at its Worldwide Developers Conference, which takes place in June of each year: this is when iOS 6 was introduced last year, and iOS 5 the year before that. While we likely won’t hear much from the fruit company until then, it is a widely known fact that a future release is planned and already in the works. 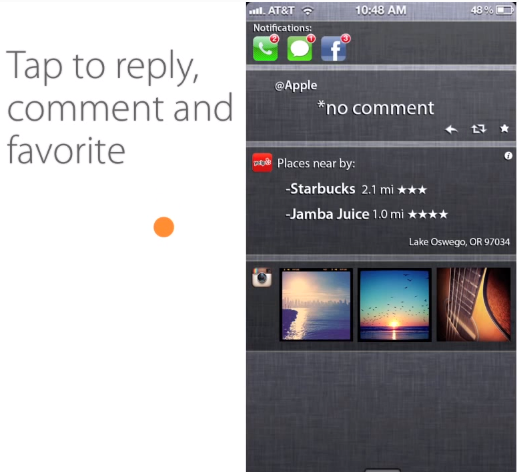 Until then, the tech community is free to speculate and designers free to apply their creativity into what they wish to see into iOS 7: we have seen quite a few interesting concepts so far, such as another possible implementation for notifications and a rather interesting lock screen concept.

We will be sure to keep you updated on the best concepts what we find around the web. This is shaping up to be an exciting year for iOS users, let’s only hope that Apple doesn’t let us down.

Thanks, Kyle for the hat tip!