The way smartphone and tablet gaming has bullishly pushed aside competition from standalone devices in recent years has been nothing short of remarkable.

With hundreds of thousand of games available on various platforms, there’s something for everyone, and titles are cheap, easy to obtain, and often extremely addictive.

As the devices have continued to improve year by year, so has the quality of gaming, with titles such as Infinity Blade 2 offering cutting-edge graphics which make it joyous to play – even if you’re not particularly partial to the sword fight-in-a-castle genre.

While sharp, realistic visuals are wonderful and all, sometimes the games which give us the most pleasure are those which tap in to our nostalgic minds. I’m talking Pac Man, Super Mario, Lemmings and the like. While many of those titles are indeed available at the App Store, touchscreen Pac Man doesn’t quite capture the imagination like a good ol’ plastic joystick. 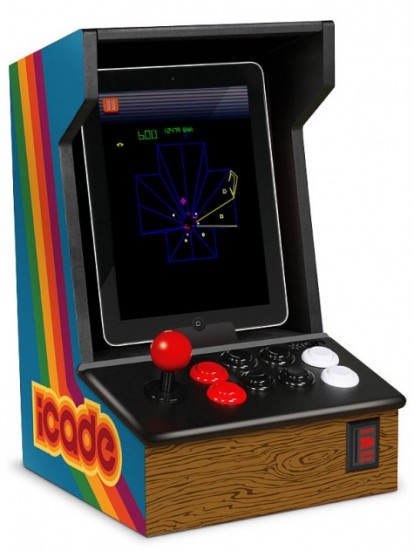 That’s where iCade comes in. Developed by ION Audio, this little beauty rolls back the years for your treasured iPad, creating a retro arcade-like unit so you can relive those fond memories via the advanced technology of today.

It retails unassembled, but is pretty straightforward to set up, and even simpler to pair with your device via Bluetooth. According to NetbookNews, the joystick and buttons are pretty sturdy, which is essential since they’re likely to take a bit of a battering once you get into Time Crisis.

It retails for 80 bucks on Amazon (new), which may put some off, but all things considered, can you really put a price on rediscovering those magic moments in the penny arcade?

As a suggestion, you’ll probably want to grab Atari’s Greatest Hits, too, which brings up to 99 of those classic 2600 games we’ve grown fond of over the years. You get one free, with the option to add more with in-app bundle purchases. The full set costs just $14.99, which we reckon is an absolute steal.

There are also an array of other titles tailored specifically for the iCade, and you can find the comprehensive list on ION Audio’s webpage.