The "another day, another tweak" cliché has never been more relevant than in the current state of play.

Last weekend saw the iPad 2 and iPhone 4S join every other iDevice in the iOS 5 untethered jailbreak wonderland, and developers have been pushing those tweaks through the Cydia store at an incredible rate ever since.

Once you’ve broken from the shackles beset by Apple’s stock offering, there’s rarely scope to look back, as some of the tweaks become as second nature as sending an SMS or making a phone call.

Video calling – via FaceTime – is still relatively new, having been introduced along with iOS 4 back in 2010. Whilst it’s a great way to have some face-to-face conversation with a friend or relative using an iDevice or Mac, it – like many features of iOS – still falls short in certain departments.

Although iOS 5 is – as it should be – the very best iteration thus far, it’s still bereft of basic functions which would allow the experience to be a lot better tailored to suit individual users. For example, aforementioned FaceTime doesn’t work over 3G, only Wi-Fi hotspots; well actually, it does work, but the fruit company simply doesn’t allow it.

With many data power-users having their contracts unwittingly upgraded or even pruned for breaking fair usage boundaries, it could be argued that Apple is providing many consumers a great service – keeping excessive cellular data use under control. That said, the option should be there, since apparently, some carriers still do offer genuine unlimited data packages, and Wi-Fi – whilst improving – simply isn’t available everywhere.

That’s where the jailbreak developers enter. 3Gvenice, developed by ravenwing, enables FaceTime over 3G using native iOS 5 support. It’s free, runs smoothly, and is one of those tweaks we’d recommend you have on board just incase. 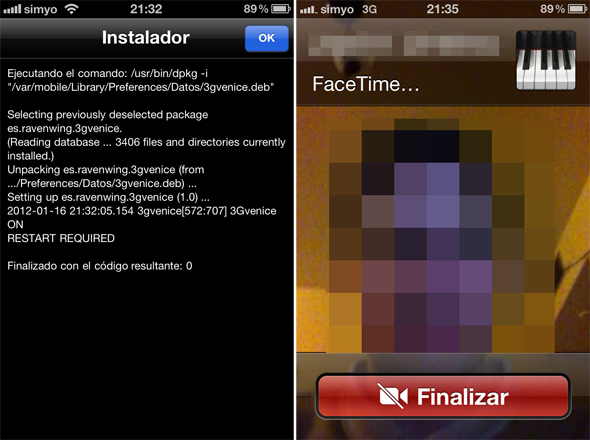 It’s available over at the Modmyi repository, which will be one of your default sources in Cydia unless you’ve opted to manually delete it.