TouchSwitcher is a simple, free Mac app that adds a button to the Touch Bar for quicker and easier switching between the most recently used apps on the 2016 MacBook Pro.

Apple’s release of the 2016 MacBook Pro, even if it’s in fits and starts following a release in which finding notebooks in stock is easier said than done, brings with it one of the most interesting changes to the MacBook lineup in quite a while. We are, of course, talking of the Touch Bar – Apple’s OLED touch screen replacement for the traditional function keys. Apple has already built strong support for the Touch Bar into macOS and its stock apps, but it’s the way third-party developers take to the new abilities afforded by the Touch Bar that will make or break it. 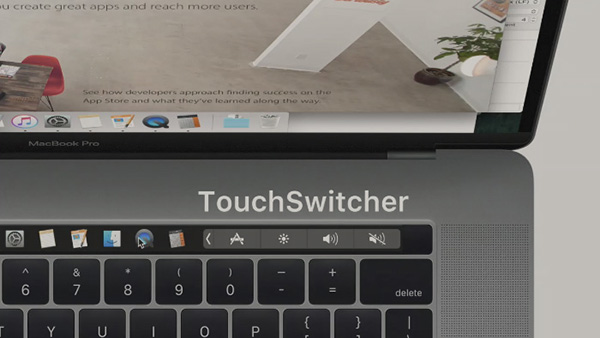 With some popular macOS app developers already throwing their weight behind the Touch Bar, some interesting uses for it have begun to spring up. No, we are not talking about the port of Doom that brings everyone’s favorite first-person shooter to the Touch Bar, but a new app called TouchSwitcher.

A simple app that makes multitasking easier than ever thanks to the Touch Bar, TouchSwitcher does one thing and one thing only – add a button to the Touch Bar, which makes it quicker and easier to switch between the most recently used apps, removing the need for more traditional app switching solutions such as the Command+Tab key combination that has served Mac owner so well for so long.

Out with the old and in with the new though, and if TouchSwitcher can make the Touch Bar a better option for switching apps, then so be it.

TouchSwitcher is a free download for anyone who owns a MacBook Pro with a Touch Bar, and is well worth a download if only to give it a whirl. The app may need relaunching every once in a while due to the way macOS keeps non-system apps active for Touch Bar access, but it’s a small price to pay for quick, easy app switching if you ask us!

You can get TouchSwitcher from the app’s official webpage over at hazeover.com/touchswitcher.html.