How To Get Touch Bar On Any Old / Unsupported Mac [Video]

This is how you can invoke an on-screen Touch Bar on any old unsupported Mac or hook an iPad up to it and use it as an external Touch Bar.

Out of all the changes Apple has introduced to its flagship notebook lineup with the 2016 MacBook Pro, the Touch Bar may be the least controversial and the most appreciated. Sure, not everyone is a fan, though there are arguments both for and against the utility of the new contextual input medium. 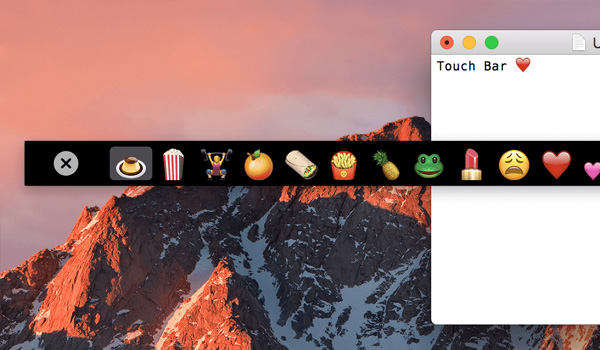 If you really want to form an opinion about the Touch Bar, the best way is to get your hands on it. Spend some time with it. Of course, you’re going to need one of the new MacBook Pro models, each of which costs a pretty penny. You could take a trip to the nearest Apple Store for the same, but why go through all that fuss when you can get a feel for the feature right at home, using your old Mac? A clever solution called Touch Bar Demo App lets you do just that.

Created by Andreas Verhoeven and Robbert Klarenbeek, the app lets you invoke an on-screen Touch Bar by hitting the Fn key. That, of course, only offers a part of the experience, which is why, provided you’re prepared to jump through a couple hoops, the app will let you hook your iPad up to your Mac via USB and use it as an external Touch Bar.

It’s unclear if it works with other iOS devices, though there might not be much of a point in finding out given how inconvenient it might be to fit a those contextual options onto the tiny screen of an iPhone or iPod touch.

The whole thing is made possible by a macOS server application and an iOS client. The server application can function on its own to display the aforementioned on-screen Touch Bar while to have the same displayed on your iPad, you will have to sideload the iOS app to the device after first having it signed. There are a couple ways you can go about that. You can find our Xcode guide for sideloading here: How To Sideload iOS Apps Without Jailbreak Using Xcode For Free. Those of you who prefer using Cydia Impactor can do so by following our guide here for sideloading: Sideload iOS Apps On Windows, Mac With Cydia Impactor Without Jailbreak, Here’s How.

Before you get into it, note that the solution only works with macOS Sierra 10.12.1 build 16B2657 (or later). Earlier builds of the same Sierra iteration do not have Touch Bar support. To download Touch Bar Demo App to your Mac right now as well as for further info on the installation process and usage, head on over to the project’s GitHub page.

While you’re waiting for your download to finish, check out the app’s video demo below.