If you’re a long-time jailbreaker of Apple products, the wait for the iPhone 4S untethered break may have been particularly treacherous, and the release of the A4 jailbreak late last month must have looked like raw steak to a lion. 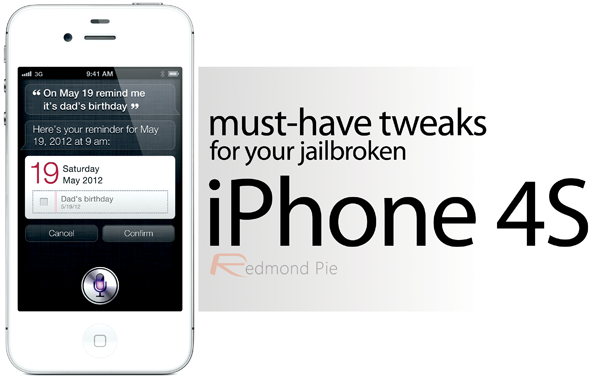 Thankfully, the many contributing developers have released what we’ve all been waiting for.

So, you’re jailbroken; that’s great and all, but what’s next? Well, fire up Cydia, and we’ll take you on a little journey through some of the best tweaks available for your recently unshackled device. We’re going to run through our favs, so watch closely, and you’ll have a few very useful tweaks to get you started!

Note, at time of writing, the jailbreak has been out for mere hours, so Cydia may be susceptible to crashes, server overloads, or indeed not launch properly at all. Don’t fret, this is a normal occurrence as hundreds of thousands – if not millions – of likeminded gadgeteers seek the same benefits as yourselves. You’ll find that, once the dust settles, Saurik and Co. will have everything running smoothly once again.

Rather than attempting to pack loads of unnecessary features in, this tweak does one thing – and does it very well indeed. You may have tried to download, say a music video or movie from iTunes while on the go, only to realize the download would not start. This is because Apple limits the number of MB’s downloadable through a cellular connection to just twenty, leaving those on unlimited packages and bereft of an available Wi-Fi Hotspot just a tad bit miffed.

Enter 3G Unrestrictor. Recently updated for iOS 5, it tricks your device into thinking it’s on Wi-Fi whenever you activate it, meaning no more unnecessary limitations. It’s particularly popular amongst FaceTime users, a feature which can only be used over Wi-Fi; so says Apple.

It’s one of those tweaks which should certainly feature in your staple diet of Cydia imports, and is still just 99 cents as an introductory offer before it rises to the usual price of $3.99. At either price, it’s well worth it, and you can check out our full feature including download information here.

BiteSMS is Messaging the way it always should have been, and we’d go as far as to say it’s pretty much got it all. From the ability to create a message from any app with QuickCompose to the feature allowing messages to be pre-written and sent at specified dates and times, it is as close to perfection as you will get on iOS.

Despite packing in so many features, it still manages to keep that quintessentially Apple simplicity, and somehow doesn’t feel too overloaded. It’s only recently been updated for iOS 5 compatibility, but fits in once again like a glove.

It’s fully integrated with NotificationCenter, so you’ll never miss a trick, but this five-star app will set you back ten bucks.

You can read our full, extensive coverage of BiteSMS here.

Since iOS 5 came packaged with that inbuilt Twitter API, FastTweet is a no frills way to tweet quickly and efficiently. Similarly to 3G Unrestrictor, this tweak has one sole purpose, and does it to absolute perfection.

Of course, you can’t check your direct messages or currently trending fad of the hour, but that’s not its purpose, and there are a bunch of other apps available with varying interfaces to cater to those needs. You tweet, you close, and you tweet again. Nice and simple – just how we like it.

Sound good to you? Well what are you waiting for; check out the full post here!

This great tweak, courtesy of chpwn, allows you to slide between apps in a similar way multitasking gestures does on the iPad. It helps make an already smooth OS even smoother, and allows the multitasking bar to be opened with a swipe, as opposed to double-tapping the home button which we all – at some stage – get wrong and end up closing our currently-open app.

Based on a similar function of the Nokia N9, it’s a wonderful tweak, but then again, we’d expect nothing less from chpwn – one of the greatest to have ever done it.

Continuing with the as it should have been motif of BiteSMS, this tweak demonstrates some of the features we’d love to see in the native YouTube iOS app.

YouTubing without ads seems like a distant memory, with most videos now featuring mandatory advertisements of up to 30 seconds. ProTube blocks them out, meaning you’ll probably not want to access the main site again for fear of the spam.

We’d have to pitch the clinching feature as MP3-saving capacity – meaning any audio can be ripped and saved for listening at any time, as depicted above. Then again, with AirPlay added to the mix, we’ll let you decide on your favorite. Want more? Go here!

Although we wouldn’t necessarily want Siri to get to work on every word we speak within her earshot, the option would have been nice, but since Apple hasn’t catered to this just yet, developer Aman Gupta (@tmm1) has brought this feature to those jailbroken.

Have a look at our full post on this particular tweak, located here.

Although we appreciate our iPhone 4S for its hardware capabilities and smooth operating system, we are also – to varying degrees – wooed by the aesthetics. After all, it’s a beautiful device, and making things look a little bit prettier here and there is nothing to be ashamed of.

Simply put, Overflow makes dock icons look like cover flow, and although there have been ways to achieve the look before, manually editing icons in WinterBoard is neither enjoyable, nor practical, since once the next very important app comes along, you’re stuck with an icon fixed at a 35 degree angle.

Overflow is simple, and unlike the manual method, easy to reverse. If you’re impressed by the screens, have a look at the full post, which you can find here.

This tweak allows you to add nine of your favorite apps to the somewhat wasteful area above the active multitasking bar, which is very useful indeed – if you only have nine commonly-used apps.

It works perfectly, but we can’t help but feel there’s still some wasted space in which the dev could have filled to fit more apps. But that is something we can hope for with future updates, and those gripes shouldn’t take away anything from what is an essential app – especially to power users.

Refer to our full feature for more.

Springtomize was initially released last March, and as an alternative option to WinterBoard, allowed users to customize many aspects of iOS.

The sequel provides much of the same, bringing iOS 5 compatibility and a sleek new look. As well as customizing the aesthetics of just about anything, you can disable certain aspects you may not find particularly useful, such as Voice Control or Multitasking.

Well worth checking out, you can find a more detailed overview here.

This tweak simply fills an extremely obvious gap left by Apple in iOS 5, bringing a Notification Center-like experience to the LockScreen. Maybe Tim Cook and his development team didn’t think iOS users would want such features on the device’s front page, but that’s by the by, since IntelliScreenX has it covered.

Building on the success of LockInfo, it provides up-to-date information on various forms of notifications, as well as catering for widgets.

It looks beautiful, and is extremely practical. See this post for more information.

SBSettings is, in our humble opinion, the most useful tool available to the jailbreak community. The essential aspects of the iPhone, such as power, Wi-Fi, and cellular data can be controlled with a simple slide across the top of the screen.

Taking advantage of the NotificationCenter in iOS 5, BBSettings makes things even easier by packaging the useful features of SBSettings into Apple’s new alerts infrastructure. For a full overview and download, see here.

Ahh, so you’ve been staring at the same old interface for three-and-a-bit months now, and if you like spontaneity, you’ve probably been itching to make little adjustments to the theme and UI to suit your taste. Whilst WinterBoard is the obvious option now you’re out of jail, it has been known to slow devices down as well as make them look awfully tacky at times.

So rather than throw WinterBoard in as a suggestion, let’s start with a few subtle changes; after all, minimalistic nearly always looks better, and in what appears to be the first of its kind, Siri Mic Colors allows you to do just what you’d expect.

You’ll need to add the repository http://repo.technetec.com to your list of sources, after which you’ll be able to change that purply Siri mic button to whatever you choose. It’s subtle, minimal, but still gives your device a little originality whilst maintaining class.

Again, this tweak does exactly as it says on the tin, bringing a little personality to an otherwise rather plain-looking area.

Let’s face it, we don’t love Siri for her looks, but her wonderfully-educated personality. That said, a change of clothes now and then would not go amiss, wouldn’t you agree?

As with the mic color changes, there are only a few available, but we reckon that keeps things clean, tasteful and simple.

Now this is where things get a little more interesting. VoiceUtils is the first of undoubtedly many tweaks bringing some form of customization go Siri’s commands.

It’s not too bad for a first attempt, and we fully expect to see a massive influx of similar tweaks in the coming days/weeks/months.

VoiceUtils allows you to respring, reboot, turn your device off and enter safe mode via Siri, all very handly little time-savers.

With the iPhone 4S now jailbroken, expect to see many Siri-related tweaks appearing in the near future. Although the wait has been rather agonizing at times, at least we’re not having to restore from a stop-gap tethered boot option.

As an added bonus to all these great tweaks, Grant Paul (or as he’s better known in the jailbreak community, @chpwn), has confirmed that his tweaks work just fine on the iPhone 4S. To refresh your memory, these include Zephyr (as mentioned above) along with classics such as the Infini- series, which allows an infinite scrolling of the springboard, folders and dock, as well as the very useful Gridlock, which allows icons to be placed in various positions as opposed to one after the other as dictated by Apple.