It may have only been a number of days since Apex Dev Team launched Velox for iPhone tweak into the jailbreak world, but it seems that it has already been accepted as one of the best and popular tweaks we have seen in a long while. Adding swipe gestures onto native app icons with the intention of bringing additional functionality into a folder window is obviously an extremely good idea. So good in fact that it has already started inspiring developers to build add-ons for Velox which offers functionality that doesn’t exist with a standard installation of the tweak.

Stopwatch for Velox is one such add-on. It is a fairly self-explanatory add-on that shouldn’t really need any great in-depth description of what it does, but if you look past the functionality, then it actually represents quite an exciting time in the jailbreak world. Detecting what apps are installed on the device and introducing new app specific features on the back of those installations is an extremely attractive prospect, and the beginning of what is being shown off as a fully functioning stopwatch that can be used when the Clock app is invoked using the Velox method. Think of it as a widget that comes up whenever you tap on the native Clock app on the home screen. 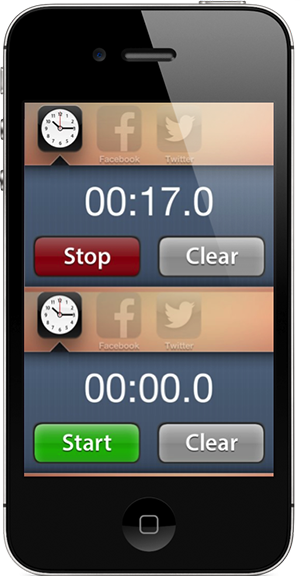 The stopwatch is essentially the same simple offering that is included in the native iOS Clock app, although it is now more easily accessed within its own folder / widget, emanating from the app icon itself. It features large, bold text for easy visibility as well as immediate access to the Start, Stop and Clear buttons that allow the user to control the elapsed time on the watch itself. Like the rest of the Velox functionality, all of this happens from the home screen of the device within a dedicated folder.

The first of add-ons for Velox may be simple, but we have seen in the past that simple is sometimes the best way forward. Stopwatch for Velox has no additional options or settings to configure and obviously relies on the Velox tweak being purchased and installed on the device before it can function. 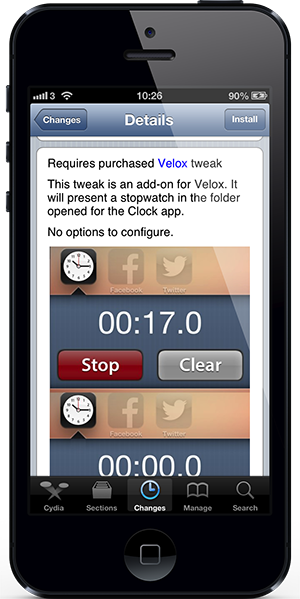 Stopwatch for Velox is available as free-of-charge download from the BigBoss repository and requires the installation of the $1.99 Velox package from Apex Tweaks.