Temple Run For Android Will Launch On 27th March, Will Be A Free Download

Every now and again, a game releases for mobile devices which simply takes over – engaging nearly every user it encounters and becoming a cult favorite in the process.

The common denominator amongst these games is that they are usually incredibly easy to play, have simple concepts, but gradually make the achievements / levels hard enough to keep people playing for a sustained amount of time.

Examples so far in the relatively short lifespan of smartphone app stores include Cut The Rope, Tiny Wings, and the billion-dollar gravy train that is the Angry Birds franchise, which sells plush toys, speaker docks, even underwear for those fanatical about exploding poultry.

More recently, the game sweeping iOS users up a vacuum goes by the name of Temple Run. Just like the aforementioned, it is incredibly simple to play, but difficult to master – particularly if you don’t have the steady hand and concentration. You control the direction and position of a continually running Indiana Jones-like character, avoiding obstacles such as fallen trees and large gaps while collecting power-ups and coins in order to survive for longer and unlock additional extras. 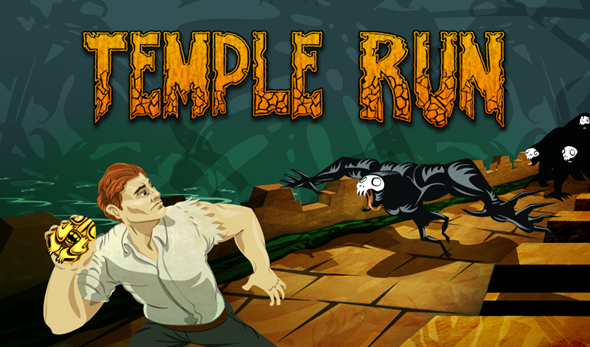 While there is no multiplayer feature, the competitive edge is still prevalent in the score achievable. On the iPhone version, the final challenge is to get a total score of 10 million, which is calculated using a combination of distance covered and coins collected, and is, often, the achievement which eludes.

Droidsters will be pleased to learn that Temple Run is now in the process of being ported through to Android, with developer Imangi Studios’ Keith Shepherd stating:

We are excited to finally share the Android release date with our fans who have been so enthusiastic and supportive of Temple Run. By expanding to more mobile devices, we hope to provide the same addictive and fast-paced gameplay to an entirely new group of players.

Although the release is sure to please Android users, iOS users will also have a larger army of potential rivals in the battle to see who is the niftiest Temple Runner.

If you’ve just come out of hiding and haven’t heard of Temple Run, well, it’s kinda popular, having just surpassed 40 million downloads on iOS, so you may want to give it a try! There will be a free to download version of Temple Run available on March 27th, and we’ll be sure to remind you once Imangi does finally release it.