With the advent of the smartphone and handheld gaming consoles such as the iPod touch, “gaming on the go” has taken a whole new meaning. Games like Angry Birds, Doodle Jump and Fruit Ninja have active gamers in the millions which is quite close to the most popular console and PC games. More recently, a platforming game called Temple Run was released for iOS devices. As of typing, it is 3rd most popular free app on the App Store with a reported 7 million daily active users, and we’ve received news that it is coming to Android in just a couple of days! Details after the jump.

The news comes from In Entertainment – a gaming website – in the form of a post in which they discuss the state of smartphone gaming and the inevitable release of Temple Run on Android. 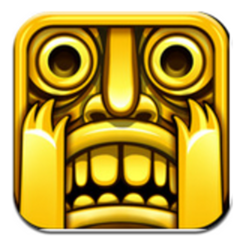 We’ve actually known about Temple Run coming to Android since mid-January, but the date has only been confirmed today and it is February 9th, just two days from now.

It’s no secret that both games are wanted on Android, as they are currently on iOS although we do know Temple Run is due on Android this month but we do not have a specific date just yet.

Update: Temple Run will indeed be released to Android users on February 9th.

For the uninitiated, Temple Run is a simple platforming game in which you control a runner through different obstacles in a temple while he is being chased by a pack of angry monkeys. You have your usual jump, slide, strafe abilities along with power ups. Standard platforming-fare, right? What makes Temple Run so different, then?

As time increases, the speed and frequency of obstacles increases and this is the reason it is so addictive: Temple Run is easy to pick up, but difficult to master. I’ve played it on an iPod touch myself and can say that it is a must-have game!

This is good news for those of you who enjoy gaming on their smartphones. Temple Run is one of the most popular games on iOS and we think its popularity will only increase when it releases on Android two days from now.

Temple Run was initially sold for $0.99 but later turned to the “freemium” model wherein the basic game is offered for free, but extra functionality has to be unlocked with in-app purchases. We expect its Android version to follow the same model.

We will, of course, inform you when the game hits the Android Market, so stay tuned to Redmond Pie!