The smart laptop shell that turns your Android smartphone into a portable, powerful, and fully functional computer has surpassed its required funding goal on Kickstarter, and there is good reason to be uber excited about this.

You may or may not have heard of the Superbook project, but it exists as a quick and convenient way to leverage the processing and computational power of an Android device in order to offer a full computing experience on a usable screen. Andromium Inc. were initially looking for a meager $50,000 to fund the project, but have so far received more than $400,000 with 28 days still to go. 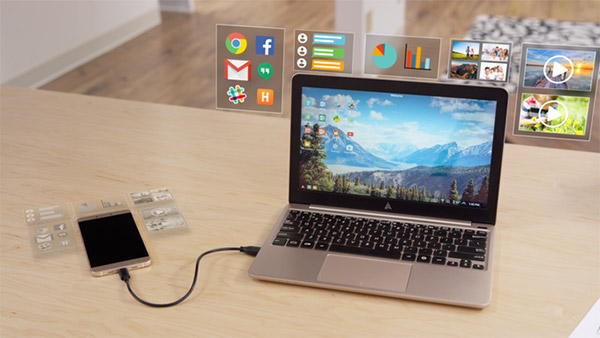 The product itself may seem a little confusing at first glance. But when you actually dive into it, it not only becomes extremely clear what the folks at Andromium are trying to do, but also that it’s an unbelievably good idea and if the swift and excess funding is any hint, there is a huge marketplace for such an accessory.

That level of enthusiasm has been validated by the fact that the project is now flying past stretch goals like they are going out of fashion. Users are essentially paying for the privilege of convenience and being able to access computing power without having to carry around a full machine. The Superbook accessory is essentially a shell of a laptop which does not carry any processing power at all, which makes this all the more interesting.

The Superbook will come with more than just the benefit of facilitating a full computer experience through the use of an Android device. A lot of users tend to upgrade their smartphone on a year or two-yearly basis, ensuring that they always have the latest hardware with the latest power.

If that’s the case, then it could become totally unnecessary to constantly upgrade a computer or laptop in parallel. In fact, such is the confidence, that Andromium believes the Superbook “can do it all”, including offering access to desktop-class browsing, access to apps, games, and even programming when on the go if that’s your thing.

The Superbook will come with an 11.6-inch HD display which could be updated to 1080p if the stretch goal of $1 million is reached. It will offer up to eight hours of battery time before it requires a charge. There’s a built-in keyboard with Android navigation keys, multi-touch trackpad, and even access to all files and documents stored on the Android device.

Users will simply need to plug in the Android phone (Android 5.0 and up) via the USB-C port, watch the Andromium app load up, and away you go with instant access to all of the above. If you want to back the project, you can still do so as the amount pledged continues to rise.

The Superbook is expected to ship out to backers in January and February 2017 for $99, and will be available in Blue and Gold colors.